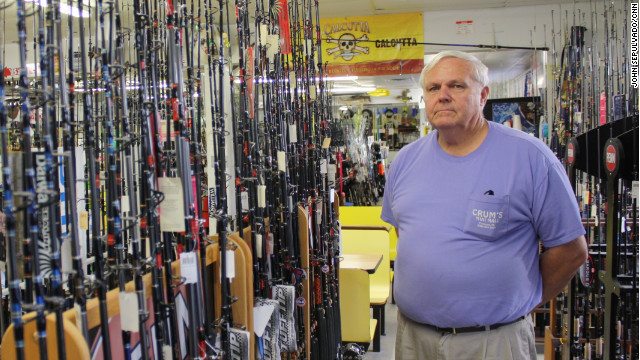 Business owner Ron Crum calls Mitt Romney an "elitist," which in North Florida is as bad as calling him a liberal.
STORY HIGHLIGHTS

Crum, a Republican small business owner in this sleepy seaside town south of Tallahassee, calls Romney a multi-millionaire who expects to get breaks because he's rich -- be it a low tax rate or the GOP nomination.

But former U.S. House Speaker Newt Gingrich, Crum says, is a man who understands the plight of the working class and can articulate conservative principles effectively.

Picking up two fishing rods, Crum says the expensive Penn International, priced at almost $400, is like Romney. Meanwhile, the Jarvis-Walker, which he says does everything the other rod does but sells for about $50, is like Gingrich.

Putting the poles back in the rack, Crum says, "Gingrich, as a capitalist wants to come out here with the working people and the people earn money from the industry of this country. Romney is basically an elitist."

And for conservative North Florida voters, the term elitist is almost as bad as calling someone a liberal. That label is sticking with Romney, even though both candidates are worth more than many North Floridians earn in a lifetime.

North Florida locals like Rodger Noe say they can remember when industrial fishing and crabbing operations provided jobs for North Florida, back before environmental regulations strangled the local economy.

The median income in this conservative area is between $24,000 and $29,000. The sluggish economy is evident on boat docks, with its empty slips.

Soundoff: What issues matter to you this election?

Most of the boats left belong to people "with their noses in the air," Noe says.

"Romney's one of them," Noe says. "I liked Herman Cain, but now I like Newt."

State polls in Florida haven't given much hard data about North Florida's rural areas, but a CNN/Time/ORC poll released Wednesday gave Gingrich a slight edge in north and central Florida while Romney was the favorite from Tampa Bay and south.

Romney recently attacked Gingrich as a career politician who hasn't lived in the "real streets" of America.

"Well, that's another thing," Noe says laughing. "We got highways and roads here. Cities have streets."

The prospect of a Gingrich candidacy is also exciting some of the liberals in the area.

In Baum Community, a forested little town north of Tallahassee, former teacher and "gun-owning liberal" Paige Forshay says she's been talking about Gingrich a lot with her conservative father.

One of the topics was an ex-wife's interviews in which she says he wanted to have an open marriage.

Forshay says if Romney's nominated, she'll vote for the Democrat, but she won't engage in the election.

But if Gingrich represents the GOP, she'll stuff envelopes, knock on doors... whatever she can do to help Gingrich lose.

Get all the latest news at CNN's Election Center. There are race updates, a delegate counter and much more.
Obama makes history, again

A black man is returning to the White House. Four years ago, it was a first, the breaking of a racial barrier. Tuesday night, it was history redux. And more.
Five things we learned

In a historic turnaround, the ballot box is showing America's shifting attitudes about same-sex marriage.
Demanding more from second term

Even though voters indicated to pollsters that their financial situation is the same or worse than it was four years ago, they put their trust in the president.
Victorious Obama faces challenges
updated 4:19 AM EST, Thu November 8, 2012

The president faces a long and familiar set of challenges after riding a wave of support from moderates, women and minorities to victory.
GOP retains grip on House
updated 9:27 AM EST, Wed November 7, 2012

Republicans kept a lock on the U.S. House of Representatives, a crucial victory after the party failed to wrest away the presidency from Barack Obama and the Senate from the Democrats.
Democrats keep control of Senate
updated 7:34 PM EST, Wed November 7, 2012

Democrats will retain their control of the Senate after winning several closely contested races on Tuesday.