Walkout at U.N. as Ahmadinejad speaks 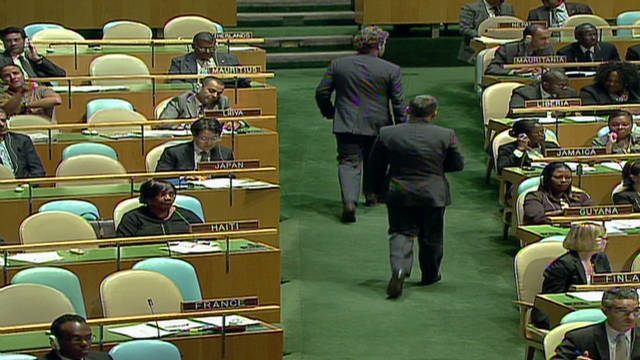 United Nations (CNN) -- Delegations from the United States and several European nations walked out of the U.N. General Assembly Thursday during Iranian President Mahmoud Ahmadinejad's speech, in which he repeatedly condemned the United States and said some countries use the Holocaust as an "excuse to pay ransom... to Zionists."

Delegates from France, Germany, and the United Kingdom were among those who walked out. Delegations from Canada and Israel were not present from the beginning.

In his remarks, Ahmadinejad called the September 11, 2001, attacks "mysterious" and said they were a pretext for a U.S.-led war against Afghanistan and Iraq.

He also placed blame on the United States for numerous global problems including the financial crisis, criticizing it for dominating the world's "policy-making establishments," overspending on the military, and "printing trillions of dollars" that triggered inflation, according to an English translation of his speech provided by Iran's U.N. mission.

Ahmadinejad said the U.S. government views Zionism as "sacred," and that "European countries still use the Holocaust after six decades as the excuse to pay (a) fine or ransom to the Zionists."

After assailing the United States, Ahmadinejad said "the main question is the quest for the root cause of such attitudes. The prime reason should be sought in the beliefs and tendencies of the establishment. An assembly of people in contradiction with the inner human instincts and disposition who also have no faith in God and in the path of the divine prophets, replace their lust for power and materialistic ends with heavenly values. To them, only power and wealth prevail, and every attempt must bring into focus these sinister goals."

On the eve of the address, the Iranian president declared his country to be "a new model for life to the world."

He also said that the United States might be willing to "hijack" the Middle East uprisings, according to the Iranian state-run news agency IRNA, but did not further explain his assertion.

Ahmadinejad's appearance at the United Nations in New York comes a day after two U.S. hikers, held in an Iranian prison for more than two years, were released.

Wednesday evening, Ahmadinejad met with a group of U.S. university students, and then gave an interview to Iranian satellite television.

His office provided translated quotes from both.

The Iranian leader said "that the world is in need of change, and Marxism, liberalism, humanism and the West could not solve man's problems," his office said. Ahmadinejad added that "relying on its culture and rich civilization," Iran is "the only nation" that "can offer a new model for life to the world."

He told the students "that the U.S. may be willing to hijack the regional uprisings but a stormy movement is under way," IRNA reported.

"Elsewhere in his speech, he said that the U.N. was set up with the objective of preventing bullying in the world, but this did not happen," IRNA reported.

About 100 undergraduate and graduate students, along with some professors, attended the invitation-only dinner and question-and-answer session in New York, moderated by an Iranian U.N. official. Ahmadinejad did not eat with the guests.

Students who spoke with CNN afterward expressed excitement about the event. At the end, the guests were given hand-painted plates from Iran and books about theology.

The mood was jovial and positive, people who were there said. While some questions were asked about nuclear issues, the economy, and Israel, the tone remained positive. Ahmadinejad joked and laughed at times.

Strict security measures included the collection of phones and cameras before the event.

It was described as a very different experience from Ahmadinejad's controversial 2007 appearance at Columbia University. That year, the school's president, Lee Bollinger, challenged him on human rights, on his statements questioning whether the Holocaust happened, and on his call for Israel to be "wiped off the map" as a Jewish state. Bollinger told Ahmadinejad he exhibits "all the signs of a petty and cruel dictator."

The participants "should be ashamed of themselves," said David Ibsen, the group's executive director, describing it as "a propagandistic attempt by the regime to improve its image. Anyone claiming to support liberty, tolerance, and human rights should strongly oppose a dictator who oppresses women, kills homosexuals, violates his citizens' basic rights and religious freedoms, and pursues nuclear weapons."

Ahmadinejad also gave an interview to New York Times op-ed columnist Nicholas Kristof in which he discussed the dispute over Iran's nuclear activities. He said that if the United States gives Iran 20% enriched uranium, "we will cease the domestic enrichment of uranium of up to 20% this very week. We only want the 20% enrichment for our domestic consumption. If they give it to us according to international law, according to IAEA laws, without preconditions, we will cease domestic enrichment."

The IAEA -- International Atomic Energy Agency -- is the U.N. entity that monitors nuclear activity in the world.

Many countries, including the United States, believe Iran is trying to create a nuclear weapons program, but Tehran insists its activities are only to provide energy for the country.

When asked about the uprising in Syria, Ahmadinejad told Kristof that the Syrian government, "just like any other country," should engage in dialogue. "With clashes and confrontations problems will not be solved. They will be multiplied. Differences will be multiplied and magnified. And certainly foreigners must not intervene. Intervention of foreigners will only make the problem that much bigger, and will never solve it."

After the 2009 elections that kept Ahmadinejad in office, Iranian forces launched a violent crackdown on street protests. The 2011 U.S. State Department human rights report on Iran says "scores of protesters and non-protesting bystanders were killed, especially during anti-government rallies. Government sources reported the death toll at 37, opposition groups reported approximately 70 individuals died, and human rights organizations suggested as many as 388."

Ahmadinejad, in his interview with Kristof, painted a very different picture. "In total there were 33 lives lost," he said. "More than two-thirds of those killed belonged to the security forces and innocent bystanders. Less than one-third were those who clashed with the security/police forces. So they were a very, very small minority."