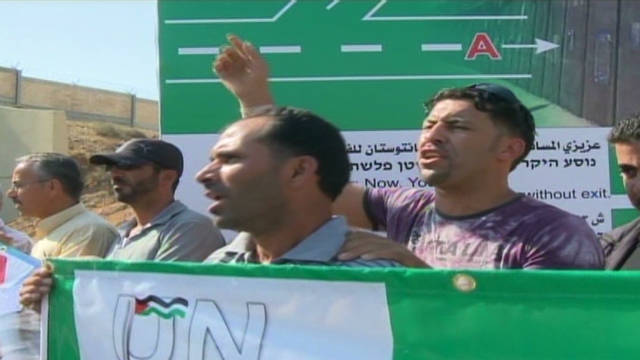 Jerusalem (CNN) -- A Palestinian bid to become a member state of the United Nations will not succeed, Israeli Prime Minister Benjamin Netanyahu said Sunday, predicting the Security Council will not approve the move.

"Their attempt to be accepted as a proper member of the U.N. will fail because this attempt must go through the Security Council," Netanyahu said at the start of the weekly Israeli Cabinet meeting. "The ruling decisions regarding membership in the U.N. go through this council. I am convinced that as a result of the operations of the United States working with us in a tight cooperation and as a result of actions of other governments, this attempt will fail."

The Palestinians "are doing every possible thing in order to thwart direct negotiations for peace," Netanyahu said, adding: "They must understand that despite their current attempt to bypass negotiations again by going to the U.N., peace will only be accomplished through direct negotiations."

The Palestinian territories currently have observer status, meaning delegates can speak in the General Assembly but not vote.

Palestinian Authority President Mahmoud Abbas said Friday in a speech in Ramallah that he will pursue full U.N. membership. "We want a seat at the United Nations, and we don't want anything more," he said.

A successful vote in the Security Council or the General Assembly will not lead to an established Palestinian state, but would allow the Palestinians upgraded international status, meaning they can pursue legal action against Israel.

Hamas, the Palestinian organization that controls Gaza, has warned Abbas not to take that step, saying it would show a willingness to acknowledge and negotiate with Israel, which would "deprive the Palestinian people from their right to come back to their homeland."

"We are warning him not to go," said senior Hamas official Mahmoud al-Zahar. "This is going to make more division inside the Palestinian people."

Asked whether there is anything that would dissuade the Palestinians from making the request, Maen Rashid Areikat, the Palestine Liberation Organization's chief representative to the United States, told CNN's "State of the Union" on Sunday that "a viable alternative would be clear terms of reference to return to the negotiations, clear time frame and an end game. To the Palestinian, the end game is freedom, to be able to live free and for the Israeli military occupation to end."

Areikat said Sunday, "We cannot continue to negotiate, while the Israelis are planting our territory, the same land that will become our state in the future, with illegal settlements."

The five permanent members of the Security Council are the United States, China, France, Russia and the United Kingdom.

The United States has vowed to veto a full membership application, should it come before the U.N. Security Council. The Palestinian government could also go to the General Assembly, where only a majority vote would be needed to gain a lesser status -- that of permanent observer, similar to the position the Vatican currently holds. A vote in its favor would be all but assured.

But Netanyahu said the General Assembly is not the "declared destination of the Palestinians," as permanent observer status would not carry the same weight and importance as an approved membership state application.

The United States will veto it, he said, and "the rest of us have got to contain the fallout ... This is one of those deals where we're either going to go forward or fall back, and I favor going forward."

The United States has "been working tirelessly to try to prevent this happening," Michael Oren, Israeli ambassador to the United States, told "State of the Union." "American diplomatic representatives have been working with other members of the Quartet, the European Union, the Russians, the U.N., to create a format which would be acceptable to us -- and we are very, very close now to the American position -- and to persuade the Palestinians to desist from going to the U.N., to come back to the negotiating table."

"We need to get to a two-state solution based on a Palestinian state living side by side with a Jewish state, in permanent and mutual peace and recognition," Oren said.

Mideast Quartet envoy Tony Blair told ABC's "This Week" on Sunday, "I understand why the Palestinians feel that they should go to the United Nations, and by the way, they're perfectly entitled to go there. But I think what we will be looking for over the next few days is a way of putting together something that allows their claims and legitimate aspirations for statehood to be recognized whilst actually renewing the only thing that's going to produce a state, which is a negotiation directly between the two sides."

Netanyahu said he will also be at the U.N. General Assembly this week.

"The U.N. is not the place where Israel gets much applause," he said, "but it is important that I will go there in order to represent the state of Israel and in order to present the truth, and the truth is that Israel wants peace."

His U.N. appearance has two purposes, Netanyahu said -- to ensure the Palestinian bid "will not succeed" and to present Israel's truth to the General Assembly, "which I believe is also the general truth, our desire for peace."

While these topics are important any time, he said, "they are important today many times over, when the Middle East is going through this tremendous shaking, that has shook Tunisia and Yemen and Libya and Egypt and Syria and ever other part of the region."

"At these times we need a government with a policy that stands tough and firm for our needs for a peace settlement, and nonetheless we are willing to enter negotiations for peace with our Palestinian neighbors should they desire to do so," Netanyahu said.

Netanyahu said he believes that "eventually, after the smoke clears from the events at the U.N., the Palestinians will come to their senses, so I hope, and abandon these negotiation-bypassing moves and sit down (at) the table in order for us to achieve peace and security."

CNN's Guy Azriel and Kevin Flower contributed to this report.