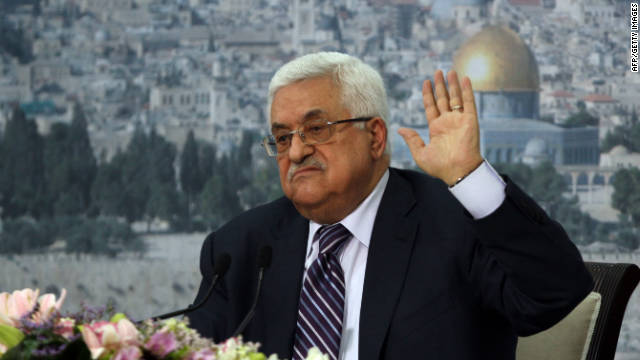 (CNN) -- Palestinian Authority President Mahmoud Abbas said he will pursue a full United Nations membership bid during a speech Friday that was likely meant to both make the case for membership and manage domestic expectations.

"We are going to the United Nations to attain full membership" from the U.N. Security Council, Abbas told an audience in Ramallah, tempering his rhetoric by adding that "we are not going to bring independence. Let's not exaggerate.

"We will continue to negotiate," he said.

Abbas says he wants the Palestinian territories "to be represented in its natural borders," calling disputed territories inhabited by Israeli settlers "illegal."

"We want a seat at the United Nations, and we don't want anything more," Abbas said.

He says Palestinian leadership does not seek to "isolate the state of Israel, but rather isolate the policies of Israel," saying he will head to the United Nations headquarters in New York "carrying an olive branch with us."

Israeli Prime Minister Benjamin Netanyahu, who is also expected to speak next Friday at the United Nations, has said the move could complicate the peace process and further destabilize the region.

"We have been calling all along for the Palestinians to return to negotiations," said Israeli government spokesman Mark Regev.

Regev called the issue of settlements "a red herring" that he says Palestinian leaders have used to avoid talks with Israel, deciding to grandstand on the international stage instead of re-engaging in peace negotiations.

Hamas, the Palestinian organization that holds sway in Gaza, also was critical of Abbas on Friday, saying he is showing a willingness to negotiate and acknowledgement of Israel, which would "deprive the Palestinian people from their right to come back to their homeland." "We are warning him not to go," said senior Hamas official Mahmoud al-Zahar. "This is going to make more division inside the Palestinian people."

As regional pressure mounts over the prospective bid next week, U.S. diplomats have been scrambling to head off the burgeoning controversy, though some analysts suggest the decision to take the vote to the Security Council could reflect a political posturing by the Palestinian leader.

Abbas concluded his speech Friday by acknowledging "other options," presumably referring to his government's ability to weigh a host of decisions at the U.N. General Assembly next week, which may or may not include the full membership bid.

"As for the other options, we have not taken a decision," he said.

While the United States has vowed to veto a full membership application, should it actually come before the U.N. Security Council next Friday, the Palestinian government could also go to the General Assembly, where only a majority vote would be needed to gain a lesser status, that of a permanent observer state, similar to the position that the Vatican currently holds. A vote in its favor would be all but assured.

The Palestinians currently hold the status of a permanent observer entity. As an observer, the delegation can speak in the General Assembly but not vote.

A successful vote in either body will not lead to an established "state" with defined borders, but would afford the Palestinian government an upgraded international status allowing them to pursue legal actions against Israel.

Abbas is expected to personally submit the request for full membership.