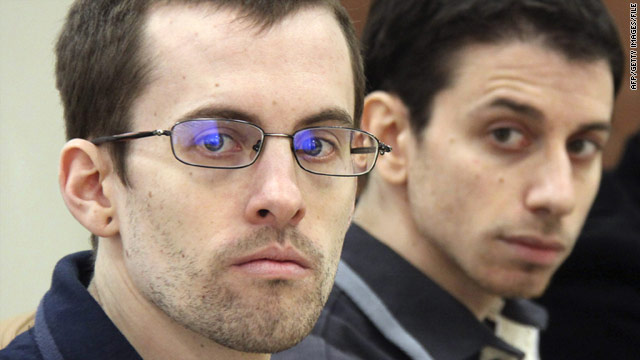 A picture released by Iran's state-run Press TV on February 6 shows Shane Bauer and Josh Fattal at their trial in Tehran.
STORY HIGHLIGHTS

Tehran, Iran (CNN) -- A lawyer for two American hikers imprisoned in Iran said he has filed all the necessary paperwork for them to be released on bail, but he does not expect judges to act on it before Saturday, he told CNN on Thursday.

Attorney Masoud Shafiee said he hoped a decision would be made then -- after the Iranian weekend -- but said he was "not privy to what goes on behind the scenes."

He said earlier this week that he expects Josh Fattal and Shane Bauer to be freed after $500,000 bail is paid for each of them, but the Iranian judiciary said later that it was only considering the bail request.

The two Americans were convicted of spying and sentenced to eight years in prison.

Iran: U.S. hikers to be freed

Oman helped secure the release of a third hiker, Sarah Shourd, in September 2010 after a judge allowed her to be released on bail because of a medical condition.

Her bail was posted by Omani sources, a senior Obama administration official said at the time.

"Oman acts as kind of the go-to (Gulf) country for any issues dealing with Iran and the U.S.," said Karasik, of the Institute of Near East and Gulf Military Analysis in Dubai.

Iran and Oman have military ties connected to the Strait of Hormuz, a key oil shipping lane, while Oman also has good relations with Washington, the analyst said. Dick Cheney visited the country several times while he was vice president, he said.

Fattal and Bauer have been held for more than two years. They were arrested with Shourd on July 31, 2009, after apparently straying across an unmarked border between Iraq and Iran while hiking in northern Iraq's Kurdish region.

Last month, Fattal and Bauer were convicted and sentenced to five years for espionage and three years for illegal entry, according to Iranian media. Their appeal is pending.

In an interview with NBC that aired Tuesday, Iran's President Mahmoud Ahmadinejad said the hikers could be released "in a couple of days" but did not mention bail.

But in a statement posted Wednesday, the judiciary said that "the case is currently being considered by the presiding judge, and any related news will be given by the judiciary."