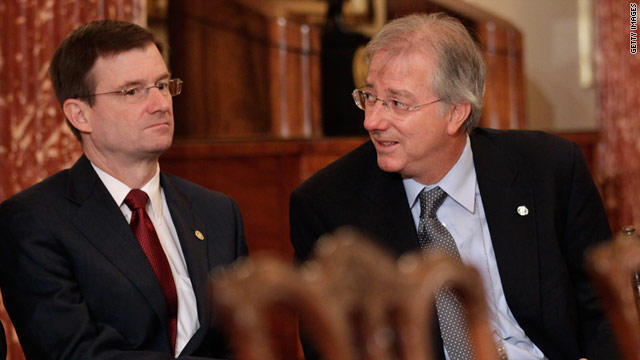 David Hale and Dennis Ross at the opening session of trilateral negotiations for a Middle East peace plan in the U.S in 2010.
STORY HIGHLIGHTS
RELATED TOPICS

(CNN) -- The top two American officials dealing with Middle East peace talks are headed back to the region, U.S. officials said Tuesday, as the Palestinians announced they are taking their bid for statehood to the United Nations.

David Hale, the special envoy for Middle East peace, and Dennis Ross of the National Security Council, will return to help Mideast Quartet envoy Tony Blair gain Israeli and Palestinian approval on a Quartet statement on a set of principles in advance of the Palestinian bid next week, according to the U.S. State Department.

A senior Palestinian official said Tuesday the Palestinian Authority will seek international recognition for statehood in the U.N. Security Council. The Palestinians had previously said that in the absence of a peace agreement they would ask the United Nations to recognize an independent Palestinian state.

"We are going to the U.N. and to the Security Council, and we will ask for full membership for a Palestinian state in the borders of 1967," Mohammed Shtayyeh, a Palestine Liberation Organization official, told reporters Tuesday.

There had been speculation about whether the Palestinian Authority would limit its quest for international recognition to the U.N. General Assembly, where the Palestinian bid is expected to win a commanding majority of votes.

Taking the issue to the Security Council would put the Palestinian Authority on a collision course with the Obama administration, which has pledged to veto the move and has warned Palestinian officials that it could lead to a reduction in American aid.

"You'd have to talk to the Palestinians about what their plans might be," U.S. State Department spokesman Victoria Nuland told reporters Monday. "There are a lot of different views out there. Our view remains that neither course, neither the Security Council nor the General Assembly, is going to lead to the result that they seek, which is to have a stable, secure state living in peace. ... They have to do this through negotiations, and that's the fastest and best course to do so."

Peace talks between Israel and the Palestinians have been stalled for a number of months, and tensions between the two have escalated recently. On August 21, Richard Serry, the United Nations' special coordinator for the Middle East peace process, issued a statement saying he was concerned about the situation, "in particular the escalation of violence in Gaza and southern Israel."

New questions were raised earlier this year about the viability of the stalled peace process in the wake of a formal reconciliation between the two largest Palestinian factions: President Mahmoud Abbas' party, the West Bank-based Fatah, and the Islamist group Hamas, which controls Gaza.

CNN's Elise Labott and Kevin Flower contributed to this report.