Turkey says it will escort aid boats to Gaza 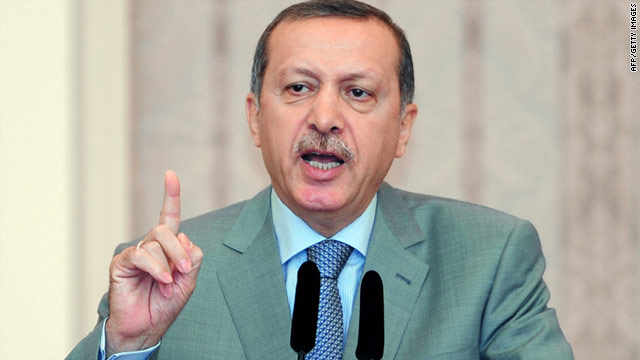 Istanbul (CNN) -- Turkey's prime minister says the country will follow aid ships to Gaza in an effort to stop incidents like last year's raid by Israeli commandos that killed eight Turks and one Turkish-American.

Turkish Prime Minister Recep Tayyip Erdogan told Al Jazeera television network Thursday that "Turkish warships are primarily responsible to protect our ships that carry humanitarian aid to Gaza. From now on, we will not allow these ships to be subjected to attacks from Israel similar to what happened with the Freedom Flotilla. ... Israel will be answered appropriately."

The tough talk from Erdogan comes during an escalation of tensions between Israel and Turkey.

On Wednesday, Israeli officials said Turkey had expelled three diplomats from the Israeli Embassy in Ankara.

A day earlier, Erdogan compared Ankara's once-close ally in the Middle East to a "spoiled boy" and announced additional sanctions would soon be imposed, according to the semi-official Anatolian agency.

The Israeli government has not yet commented publicly on the remarks made by Erdogan to Al Jazeera.

Israeli government officials told CNN that many ideas on a possible response to Turkey's statements were being discussed but that nothing definite had been decided on.

Dan Meridor, Israel's minister of intelligence and atomic energy, said on Israeli army radio Friday: "Turkey said that Israel is not above international law, she needs to understand that she is not either."

He added: "In accordance with Turkey, an international committee was appointed by the U.N., and it determined that the blockade on Gaza is legal."

Speaking Wednesday at a naval academy event, Israeli Prime Minister Benjamin Netanyahu took a more conciliatory tone, saying the recent increase in tensions with Turkey "was not our choice then, and it is not our choice now."

But, he added, Israel has the right to defend its coast and to prevent smugglers and flotillas reaching the Gaza Strip.

Turkey declared last week it was downgrading relations with Israel, suspending all military agreements between the two countries and giving the three senior Israeli diplomats less than a week to leave Turkish territory.

Erdogan's government is incensed that Israel refuses to apologize or pay compensation for those killed in the flotilla incident in May of last year.

The humanitarian workers and activists were shot dead by Israeli commandos in a botched raid on an aid convoy that was trying to break Israel's sea blockade of Gaza. The blockade was imposed, according to the Israeli military, to prevent the smuggling of weapons to the Hamas-ruled coastal enclave.

A United Nations investigation into the violent maritime event released a week ago found that the Israeli blockade of Gaza is a "legitimate security measure" in compliance with international law, but it said that Israel had used "excessive and unreasonable" force in the takeover of the ship.

Israel insists that its soldiers acted in self-defense after being assaulted by the Turkish activists.

Turkey and Israel have been negotiating for months in an attempt to improve their faltering relationship, but those efforts have failed. The release of the U.N. report was delayed while those negotiations continued.