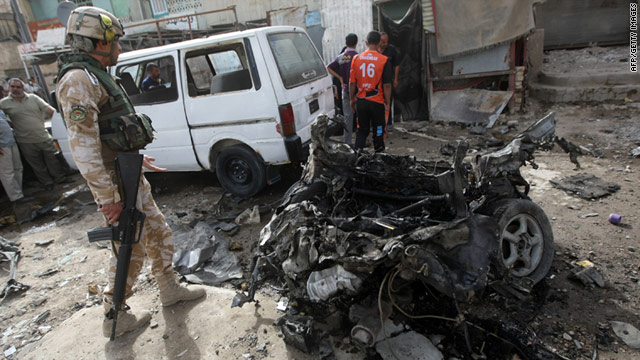 An Iraqi soldier inspects the scene of a bomb blast in the north Baghdad district of Sadr City on May 22, 2011.
STORY HIGHLIGHTS
RELATED TOPICS

(CNN) -- Suicide bombers are responsible for killing more than 12,000 Iraqi civilians and wounding more than 30,000 since the war began, according to study released by the British medical journal Lancet.

"Our findings suggest that the Iraqi civilian population suffers a substantial public health burden because it is a primary chosen target of suicide bombers and those who deploy them."

"Certainly, our findings for documented casualties do not represent total deaths or injuries, because not every death or injury is reported, or linked to a suicide bombing as a cause," the study said.

Getting an accurate picture of the Iraq war toll is difficult at best.

Iraq Body Count has been criticized by a number of people, including those who say its data is biased, undercounted or overcounted. Proponents of the organization's data, which is published at iCasualties.org, say it is the most reliable tally of Iraqi deaths.

The Lancet also faced criticism for publishing a study in 2006 that found 600,000 Iraqi civilians had been killed during the war. The authors' findings were widely dismissed.

The latest study, which was written by Madelyn Hsiao-Rei Hicks of King's College of London, also documented the number of U.S.-led coalition forces killed in suicide bomb attacks.

During the same period from 2003 to 2010, 79 documented suicide bomb attacks were responsible for the deaths of 200 coalition troops, the study found.

Of those troops killed, 176 were American, it said.

The U.S. military said no American troops were killed in Iraq in August, marking the first month without a military casualty since the invasion.

But for Iraqis, August was one of the more deadly months of the year. On August 15, the country was struck by a barrage of suicide bombings, car bombs and gunfights that left 84 people dead and 200 wounded.

Two weeks later, at least 28 people were killed in a suicide bombing at a Sunni mosque in western Baghdad, officials said.