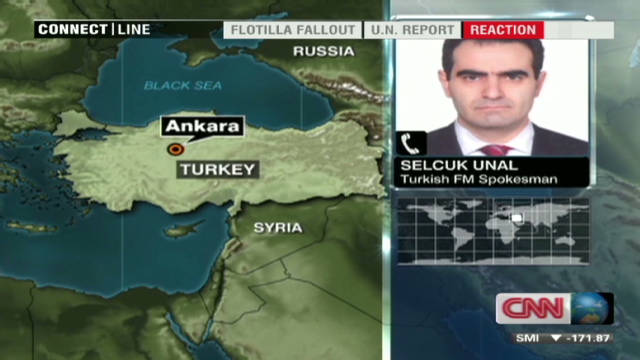 Deputy Foreign Minister Danny Ayalon told CNN affiliate Channel 2 that "the entire fashion in which the Turks have acted is strange."

"Israel must not subject its foreign policy to caprices of others," he added. "The lack of cooperation does not hurt us alone, it damages the Turks as well."

Meanwhile, Turkish Foreign Minister Ahmet Davutoglu told state-run news outlet TRT on Saturday that his nation will soon bring its case against Israel to the International Court of Justice.

"The ICJ is binding," Davutoglu said. "So we say, if you think this way, let the ICJ decide. We will initiate the legal procedure next week."

The one-time close allies have been at odds since May 2010, when Israeli troops boarded a ship headed to the Palestinian territory of Gaza -- around which Israel has a naval blockade. The Mavi Marmara had numerous Turks aboard and was part of a flotilla loaded with humanitarian aid.

Nine people were killed in the subsequent confrontation, and several Israeli troops were injured.

In the latest indication of escalating tension between the two nations, Turkish officials on Friday ordered Israel's ambassador and other senior diplomats to leave their nation.

Foreign Minister Ahmet Davutoglu said military agreements also have been suspended. But a senior Turkish official said that existing contracts must be honored "no matter what" and "we haven't touched upon intelligence sharing."

Besides the flotilla raid incident, Turkey has strongly opposed the Jewish state's blockade of Gaza because, an official said, Palestinians have suffered from the action and other Israeli policies in the densely populated region.

"It is about time for the Israeli government to face the consequences of its illegitimate actions since it sees itself above international law and ignores human conscience and must pay a price," Davutoglu said. "This price will be, above all, the loss of Turkey's friendship."

The ouster of Israeli diplomats from Turkey was cheered Saturday by Iran's foreign ministry. In a statement, reported by the semiofficial Iranian Students' News Agency, the ministry hailed the expulsion and called for more international constraints on Israel's authority in the region, particularly as it pertains to Gaza.

Ayalon, in his comments Saturday, accused Turkey of trying to "rise to unreasonable highs" in its demands for an apology on the incident and changes in Israel's policy.

Also Friday, the United Nations released the so-called Palmer report about the May 2010 raid in which it criticized Israel's actions in the incident, even as it defended the blockade of Gaza as a "legitimate security measure."

Palestinian Prime Minister Salam Fayyad voiced "deep concern" about the report's conclusion on the blockade, according to a statement from his office reported by the Palestinian Authority's official news agency WAFA.

"The fact that it considers the Israeli blockade on the Gaza Strip legal is appalling and encourages Israel to continue to violate the rights of our Palestinian people," Fayyad said, urging the U.N. and others in the "international community (to) take all necessary measures to end this unjust blockade."

Ayalon, in contrast, applauded the U.N. report and said it validated Israel's actions -- including its refusal to apologize for the incident.

"The report proves there was no point in apologizing," he said. "It would have led us into a slippery slope in which every factor in the region would have demanded Israel for an apology."

Turkey and Israel have been negotiating for months in an attempt to improve their faltering relationship, but those efforts have failed. The release of the report was delayed while those negotiations continued.

"We've waited and waited," the senior Turkish official told CNN. "There was almost an agreement that Netanyahu agreed upon ... They're just wasting our time." He was referring to Israeli Prime Minister Benjamin Netanyahu.

"This makes it official. Before it was de facto, there was nothing going on, but definitely there was contact," said the official, who asked not to be named because of diplomatic protocol.

Among other statements, Turkey signaled that it aimed to increase its presence in the region -- though Dan Halutz, a former chief of staff for the Israel Defense Forces, said one shouldn't presume the Turkish navy may now clash with their Israeli counterparts.

Halutz added that savvy diplomacy may be needed to remedy the situation, saying both sides need to find a way "to climb down" from the escalating heights.

"The word apology is very heavy, diplomats must find a way to find the right words to use," he said. "An apology is too late and would not be useful."

CNN's Kevin Flower and Yesim Comert contributed to this report.