By Hakim Almasmari, For CNN 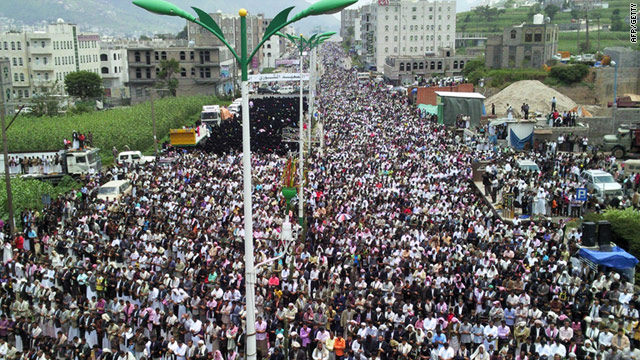 Thousands of Yemenis take part in Friday noon prayers in the city of Ibb, on September 2.
STORY HIGHLIGHTS
RELATED TOPICS

Youth protesters in Sanaa chanted, "Escalation is a must for a quick ending of regime," and "Yemen will follow Libya's footsteps."

This comes as defected military general Ali Mohsen released a video statement on Tuesday threatening to use force to ensure that the Yemeni revolution succeeds. "We know that the revolution will need military interference, and we will work to make it happen," said Mohsen.

He also advised Saleh to not "follow the footsteps of Satan" and step down from power.

Saleh is currently in Saudi Arabia where he is being treated for burns sustained in an attack on his palace earlier this year. He has vowed to return to Yemen to finish his term as president.

Other opposition officials are also calling for military action against the Saleh government.

The Yemeni revolution will prevail only if the military is used said Hasan Zaid, the secretary general of the opposition Haq party. "No real revolution can prosper peacefully from history's experience," he said.

The tribesmen created checkpoint near the residence of tribal chief Sheikh Sadeq Ahmar's, and blocked all roads leading to the Hasaba district.

The Ahmar family waged a 12-day war with the government in June, which resulted in more than 200 deaths.

Military planes were seen flying over the residence of Ahmar family in Hasaba and Hadda areas of the capital.

On Thursday, the Interior Ministry announced that the Ahmar tribes killed a senior general in the army.

The ministry said that the attacks on innocent civilians are not acceptable and the Ahmar family will be held responsible.

Abdul Qawi al-Qaisi, the spokesman for Sheikh Sadeq Ahmar's office said that two of their tribesmen were killed when government forces attacked them.

"The government continues to attack our tribes and insist on escalating the situation in the capital Sanaa," said Qaisi.

Yemen's capital is seeing its strongest security presence since the Sanaa war in June.

Eyewitnesses said that more than 2,000 pro-government heavily armed tribesmen are stationed in the outskirts of Sanaa on a mission to cleanse Sanaa's Change Square from youth protesters.

"When we arrived to Sanaa today, they were in tents and said they were waiting for government orders to enter Sanaa," said Wissam al-Sabahi, a resident of Sanaa.