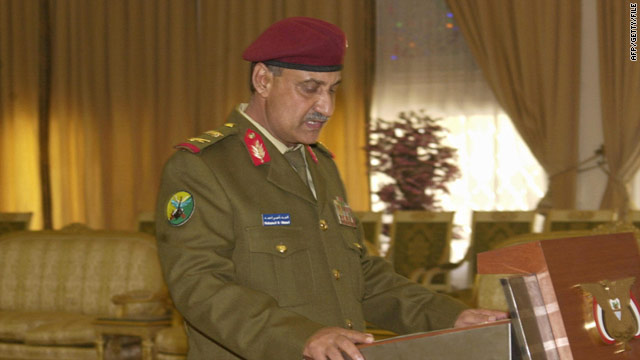 Sanaa, Yemen (CNN) -- Yemen's defense minister was unhurt but two of his guards were killed when a roadside bomb exploded near his vehicle, senior security officials in Abyan province said.

The attack came Tuesday as Maj. Gen. Mohammed Nasser Ahmed was visiting the al-Qaeda stronghold of Abyan, one of the officials said. Several other bodyguards were injured, one of them seriously, the official said, when a bomb exploded directly beneath one of the vehicles in the minister's convoy.

The minister was visiting troops and military officials in Dofas district, south of Zinjibar, the capital of the province.

However, an official in the Defense Minister's office denied that the minister's convoy was attacked.

A senior official in Abyan said the ministry may be denying the attack because it did not want to show that Abyan was not completely under government control.

"The minister visited Abyan though he knew it was not safe, and the government wanted to show strength and prove that government troops were making progress in its fight against terror," said the official, who asked to remain anonymous because he is not authorized to talk to media.

He added that the extremists had buried a large number of roadside bombs to keep government forces from entering areas under their control.

On Tuesday, six suspected al Qaeda militants were killed in clashes with government troops. The bodies were taken to Jaar Hospital, which the militants control, a medical official in the hospital said.

Abyan province was taken over by a extremist militant group called "Ansar al-Sharia" in late May, and have since then been in control of most districts of the southern Yemen province.

The defense ministry announced that more than 300 militants have been killed in Abyan since fighting started in June.

More than 90,000 residents of Abyan were evacuated and are now living in shelters in neighboring Aden and Lahj provinces.

In January, young protesters took to the streets of the capital, Sanaa, demanding the resignation of President Ali Abdullah Saleh. Fears of an all-out civil war have spiked in recent months as government forces and people alleged to be Hashed tribesmen slugged it out in the capital.

Saleh, who has been confronted with widespread anti-government sentiment and militant activity, has been urged to accept a political transition plan that will lead to his departure. He is currently in Saudi Arabia, undergoing treatment for severe burns suffered in a June 3 attack on his palace.