Turkey: No confidence in Syrian government 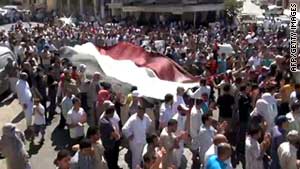 (CNN) -- Syria's ferocious crackdown against demonstrators persisted on Monday, but its tough actions against civilians are shattering its once-close relations with neighboring Turkey.

Seventeen people were killed in locations across Syria, according to the London-based Syrian Observatory for Human Rights, an activist group with a network of contacts in the country.

World powers have deplored the government's actions against protesters as Syria's isolation grows.

Turkey long has had strong influence and close political and economic relations with the al-Assad regime.

But the relations became cold when the crackdown started and when Syrians fleeing the violence crossed the border into Turkey.

Gul told the Anatolia news agency in an interview published Sunday that Turkey had embarked on many political initiatives in Syria before it "lost its confidence" over the crackdown.

Turkey, which long has touted and fostered a foreign policy doctrine of "no problems" on its borders, has tried to persuade the Syrian regime to stop its violence and deal with the unrest.

But the country's influence hasn't been able to stop the crackdown and the widespread discontent with the government.

Turkey's foreign ministry warned that Turkish travelers who "must use Syrian roads" would be at risk because of the instability there. Officials suggest that people travel in convoys, be attentive, and not stop outside residential areas unless they have to. The ministry said citizens should immediately contact the embassy in Damascus or consulate in Aleppo if "negative situations" arise.

Other voices in the region also have called for an end to the violence in Syria.

This weekend, the Arab League Council called for restraint and an end to bloodshed. Iran's foreign minister said he backs Syria's president but al-Assad must pay heed to his citizenry's demands amid the country's instability, an Iranian news outlet reported on Saturday.

The Syrian regime has systematically abused its citizens, detaining and torturing thousands of peaceful protesters since mid-March, activists say. More than 2,200 people have been killed, according to the United Nations.

The crackdown continued on Monday. Military and security forces stormed the town of Sarmin, in northwestern Idlib province, said the Syrian Observatory for Human Rights.

Five people died, including a child, and more than 60 people were wounded in Sarmin. Dozens of people have been arrested, the observatory said.

The bodies of five victims, kidnapped this month by security forces, were returned to their families in al Hawla, while three people were shot and killed in Nawa, the group said. Two died in Hayt during military operations, according to the observatory.

In the village of Kafr Nabal, a former officer and activist was killed and two people were injured during a security crackdown on opposition groups, the observatory said.

In the southern province of Daraa, troops invaded the villages of Jasim, Alhara, and Namar in search of activists and heavy gunfire was heard, Abu Abdu, an activist there, told CNN.

When the troops couldn't locate the activists, they detained seven children, ages 6 to 9, and a number of senior citizens, Abdu said. Security officials told families they would release the children and the seniors when the activists surrender.

In Damascus province, security forces stormed the village of Kara. They arrested 40 people in a series of raids and set up machine guns on government rooftops, the observatory said. One person was killed in a Damascus raid, the group said.

CNN could not independently confirm the claims.

The Local Coordination Committees noted that Syrians in the country and abroad recently have been urging their countrymen to take up arms, or calling for international military intervention. But it rejected both ideas, saying that "a militarized resistance would minimize popular support and participation in the revolution."