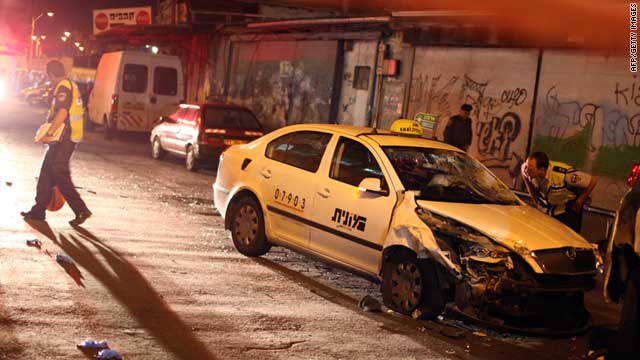 Seven people were injured in the attack, including one critically, officials said.

The man, in his 20s and from Nablus in the West Bank, stole a taxi in Tel Aviv and drove it to a checkpoint near a popular nightclub that was hosting a large party, said Israeli police spokeswoman Luba Samri.

After crashing the car, he got out with a knife in hand, police said.

He stabbed several passersby before he was apprehended, Samri said.

Four police officers and three civilians were wounded in the attack, she said.

"Tonight's event gives us additional proof that that terrorists are still motivated to carry out attacks," Danino told reporters. "There was a big event being celebrated tonight with many partygoers. The Israel Border Police deployment was exceptional and prevented a great tragedy. The terrorist attack ended with a relatively light outcome."

Meanwhile, the Israeli military said it had reinforced its military presence on the southern border, south of Gaza, due to "ongoing terror alerts."

The new Israeli security concerns follow an attack earlier this month in which a group of heavily armed gunmen attacked a series of Israeli civilian and military targets in southern Israel near the border with Egypt. Eight Israelis were killed in those attacks and the government of Prime Minister Benjamin Netanyahu held Gaza-based militants responsible and initiated retaliatory airstrikes.

Since then, Palestinian militant groups have fired dozens of rockets and mortars into southern Israel and Israel has responded with punitive airstrikes. Nearly two dozen Palestinians and an Israeli have been killed in the violence, with scores injured on both sides.