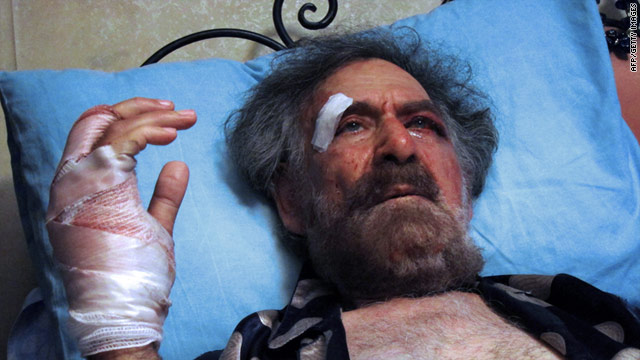 (CNN) -- The U.S. State Department got personal in its complaints against the Syrian government Thursday, accusing it of a "targeted, brutal attack" on a popular Syrian political cartoonist, Ali Farzat.

Shortly after a cartoon by Farzat depicting Syrian President Bashar al-Assad hitching a ride with outgoing Libyan strongman Moammar Gadhafi began circulating in Syria, Farzat was reportedly kidnapped by masked men, beaten and thrown unconscious from a van onto a road in Damascus

"The (al-Assad) regime's thugs focused their attention on (Farzat's) hands, beating them furiously and breaking one of them -- a clear message that he should stop drawing," State Department spokeswoman Victoria Nuland wrote in an official statement.

The statement went on to name five other "moderate activists" that it said have been jailed for speaking out against the al-Assad regime. 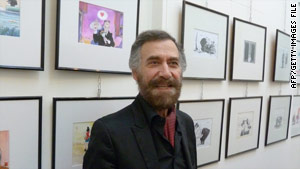 Ali Farzat poses in front of a Damascus exhibition of his cartoon paintings in October 2010.

"While making empty promises about dialogue with the Syrian people, the Assad regime continues to carry out brutal attacks against peaceful Syrians trying to exercise their universal right to free expression. We demand that the Assad regime immediately stop its campaign of terror through torture, illegal imprisonment, and murder," Nuland's statement continued.

Passers-by reportedly found the beaten 60-year-old cartoonist and took him to a hospital. A photograph circulating Thursday on the internet showed Farzat with a bandage over his right eye, his face badly bruised, and heavy bandages wrapped around both hands.

Nuland's statement described Farzat as "the most popular political cartoonist in the country," and reaction in Syria was swift to the attack on a man described on a website featuring his cartoons as having "a pen of Damascus steel."

In a demonstration of solidarity, a number of Syrians on Facebook changed their profile pictures to that of the bruised and bloodied satirist.

Farzat is known for his caricatures lampooning figures such as Saddam Hussein, who threatened him with death before banning his work in Iraq, and Gadhafi of Libya, where his work is also banned.