Palestinian, Jew give both sides on joint Jerusalem tours

By Catriona Davies, for CNN 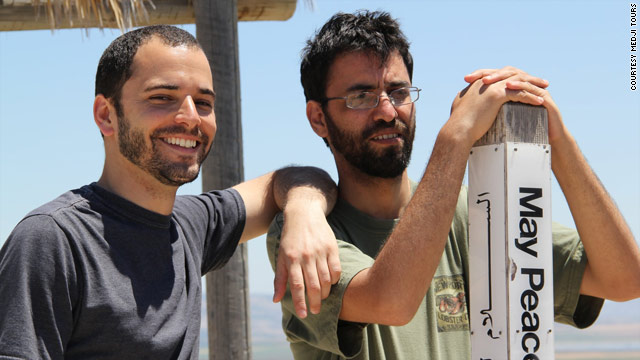 (CNN) -- As a soldier in the Israeli Defense Forces, Kobi Skolnick once fired shots at Aziz Abu Sarah's aunt's house in the West Bank town of Hebron.

Ten years later, Skolnick, a former Israeli settler, who grew up in an ultra-orthodox household, and Abu Sarah, once a Palestinian militant, work together explaining both sides of the Middle East conflict to tourists.

They discovered the uncomfortable coincidence during a tour in Hebron for Mejdi, a "dual-narrative" tour company co-owned by Abu Sarah, where every tour is jointly led by Jewish and Palestinian guides.

Abu Sarah, 30, said: "He (Skolnick) was talking about which houses he shot at, and one of the houses was my aunt's."

Skolnick said of the revelation: "I had shot at her house, and there had been shots fired from the house, but we were so glad we could share that with no judgment.

"We have profound moments like that all the time on our tours because I used to fight Palestinians and some of them used to fight Israelis. Now we come together and try to find a solution."

Mejdi guides explain landmarks and historic sites from their personal experiences and those of their communities.

Israel tourists get both sides of story

One of the tour groups from an American synagogue even spent several days on home-stays in a Palestinian refugee camp.

"They formed incredibly close relationships," said Abu Sarah. "When they left there was hugging, kissing and crying. It was one of the most emotional things I've ever seen."

Abu Sarah's own journey from extremist to peace activist inspired his work.

He was 10 years old when his brother Tayseer died after being released from an Israeli prison. Tayseer had been arrested for throwing stones during the first Intifada and Abu Sarah says he was tortured in prison.

The experience turned Abu Sarah into an "angry and bitter" teenager and he became a youth leader of Fatah -- a cornerstone Palestinian political party along with Hamas -- at an early age.

He said: "I grew up as an anti-peace activist. I had never met an Israeli or a Jew other than soldiers or settlers. I was as extreme as you can get."

The turning point came at the age of 18 when Abu Sarah realized he would need to learn Hebrew to further his career.

"I had always refused because it was the language of the enemy," he said. After enrolling on a Hebrew course for newcomers to Jerusalem, Abu Sarah came face-to-face with Jewish people for the first time in his life and realized they could be friends.

"Slowly I realized that there's an emotional wall of fear that eventually becomes hatred, and from that moment my work was to bang our heads against that wall to bring it down," he said.

Skolnick, 30, grew up in an ultra-orthodox Hasidic Jewish community and moved to a settlement near Nablus when he was 14.

During his national service in the Israel Defense Forces, Skolnick was sent to protect settlers from Palestinian militants.

He said: "This was 2001 and there was serious violence. I protected Israelis from gunshots and suicide bombers. At the time, I just felt I was protecting people. It was special to feel you are part of history and defending your own people.

I wanted to be able to hear both sides of the story, but I couldn't do that in the IDF.
--Shira Nesher, Israeli social guide for Mejdi

"Now I have different feelings. I don't feel regret, but I wish I had known more about the politics and the wider issues."

Abu Sarah said he started Mejdi tours, a social enterprise, 18 months ago to combat the propaganda spread by both sides during traditional tours. So far it has taken around 20 tour groups, mostly students, Synagogues, churches and interfaith groups from the United States, Europe and Australia.

He said: "I realized that friends of mine who had come on Israeli tours hardly wanted to talk to me afterwards because they had heard the Israeli narrative, and others who heard the Palestinian side left almost anti-Semitic.

"We don't want to spread this hate. We have three million tourists come to this country every year. Imagine if we could transform tourism to spread peace instead of hate?"

Shira Nesher, 23, a student at the Hebrew University of Jerusalem and one of Mejdi's social guides, used to be a tour guide in the Israel Defense Forces.

She said: "I was the granddaughter of Holocaust survivors on both sides, so I was reminded every day that the Israeli state was the stability the Jewish people needed after the Holocaust. The Jewish story was all I knew.

"In the IDF I gave talks to soldiers and main emphasis was on creating a will to make sacrifice for the state.

"This was an eye-opener because I wanted to be able to hear both sides of the story, but I couldn't do that in the IDF."

Palestinian Mazen Faraj, 36, has lived all his life in Dheisheh Palestinian Refugee Camp near Bethlehem in West Bank, leads tours around the camp for Mejdi.

I had never met an Israeli or a Jew other than soldiers or settlers.
--Aziz Abu Sarah, co-founder of Mejdi Tours
RELATED TOPICS

He was arrested for the first time at the age of 15 during the first Intifada and many times over the following years for being involved in demonstrations against Israeli soldiers. He spent three and a half years in jail in total.

In 2002, Faraj's father was shot dead by an Israeli soldier while traveling from Jerusalem to Bethlehem, he said.

"We just received a call from the hospital in Bethlehem to say they had his body," Faraj said. "We asked the soldiers but weren't allowed to go to the hospital because we were under curfew, so we had to wait until the morning.

"After this tragedy I had to find somewhere to put all the anger and suffering in my head, otherwise there's just more violence and revenge," he said.

"It was a long process. I didn't just wake up in the morning and decide to talk to Israelis.

"It doesn't mean I forget or forgive, but it does mean we can create a message of getting to know each other and wanting to change the situation."