Yemeni PM back home after treatment in Saudi Arabia 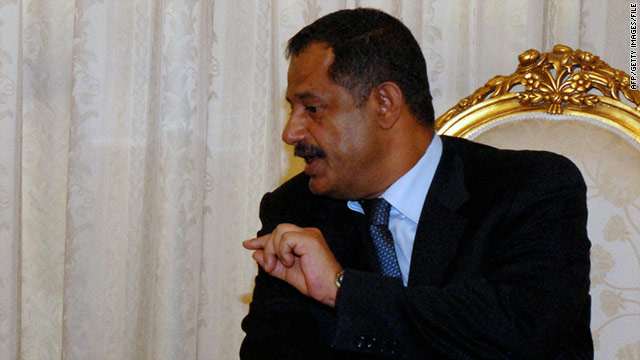 Ali Mujawar is the first senior official to come back to Sanaa following the presidential palace bombing in June.
STORY HIGHLIGHTS

Sanaa, Yemen (CNN) -- Yemeni Prime Minister Ali Mujawar was back in Sanaa Tuesday for the first time since he was seriously injured in the presidential palace bombing last June, according to sources at the airport in the capital.

Thousands of pro-government supporters welcomed him back.

Mujawar was being treated in Riyadh, Saudi Arabia. He's the first senior official to come back to Sanaa from Riyadh since more than 35 senior officials were taken to the Saudi capital for medical treatment more than two months ago.

President Ali Abdullah Saleh was one of them, and he is still undergoing treatment there.

Wounded when the presidential palace was attacked, Saleh had been weathering widespread anti-government protests, hostilities with tribes, and fighting with militants.

Upon his arrival, Mujawar thanked Saudi Arabia for its hospitality and medical treatment.

"The health condition of other officials is improving quickly and (they) will be back to Yemen soon," he said.

Fireworks continued for hours in Yemen's major cities in a show of power for the ruling General People's Congress party.

"We welcome our leaders back to Yemen one by one. During their long stay in Saudi Arabia opposition parties could not gain ground. They are weak and that is why they will not rule," said Sufyan Bukairi, a pro-government supporter who was at the airport welcoming the prime minister.

Government officials would not give a timetable for the president's return to the country.

However, Abdu Ganadi, the government spokesman, said that Saleh's health is almost perfect and he will be back soon.

"It's a matter of time before President Saleh is back in Yemen. Yemenis will be happy to greet him back to his country in the right time," said Ganadi.

Opposition leaders in Yemen have vowed not to allow Saleh back to rule in Yemen.

"Saleh will not come back and rule Yemen as long as I am alive and Yemen will never allow that to happen," vowed Sheikh Sadeq Ahmar, the tribal leader of Hashed confederation, Yemen's most powerful tribe.