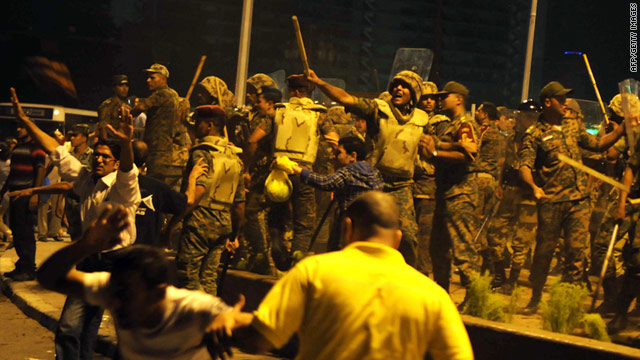 Egyptian military police react as some demonstrators throw stones and water bottles during a protest at Cairo's Tahrir Square on August 12.
STORY HIGHLIGHTS

Cairo (CNN) -- A few hundred protesters gathered Friday in Cairo's Tahrir Square, calling for a civil state and an end to military rule.

The rally began after iftar, the evening meal that marks the breaking of the fast during the Islamic holy month of Ramadan, and was organized by Egyptian activists, political groups and a few of the country's Sufi orders.

It was a protest meant not only to highlight the importance of unity, but also to contrast the message of a massive demonstration that took place in the same location in late July -- one that had brought out tens of thousands of Islamists demanding the implementation of Islamic law in Egypt.

During Friday's rally, many participants chanted slogans such as, "No terrorism, no sectarianism, Egypt is a civil state," "Peaceful, peaceful", and "Down with military rule."

Egyptian Sufi leader Alaa Eddin Abu el-Azayem, who addressed the crowd later in the evening, told his audience, "An Egyptian civil state is the only choice for Egypt." Sufism is a mystical branch of Islam.

Brief clashes broke out earlier between protesters and security forces -- at one point both sides were throwing rocks and bottles at one another. Calm was restored a few moments later.

Last Friday, a non-violent protest in Tahrir Square quickly turned chaotic, as the demonstrators were chased by military through surrounding streets.