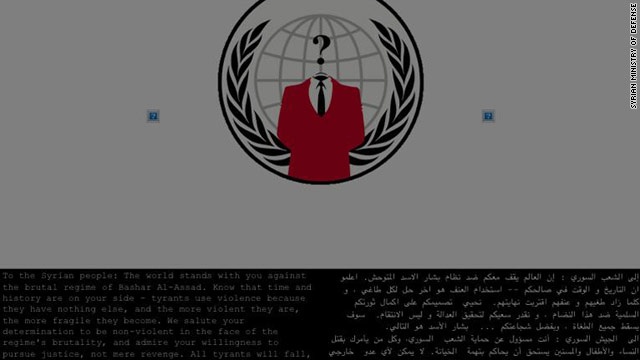 Syria's Ministry of Defense website was hacked and its content replaced by an anti-government government message.
STORY HIGHLIGHTS

(CNN) -- The Syrian Ministry of Defense's website was inaccessible early Monday morning after it was hacked and its content replaced by an anti-government message.

The work seems to be that of Anonymous, a collective of hackers that has carried out similar attacks on companies and government agencies elsewhere.

In the attack, the defense ministry's homepage content was replaced with still images from amateur anti-government videos. A Syrian flag spanning the page had, at its center, the 'Anonymous' logo -- a headless man in a suit.

"To the Syrian people: The world stands with you against the brutal regime of Bashar Al-Assad. Know that time and history are on your side - tyrants use violence because they have nothing else, and the more violent they are, the more fragile they become. We salute your determination to be non-violent in the face of the regime's brutality, and admire your willingness to pursue justice, not mere revenge. All tyrants will fall, and thanks to your bravery Bashar Al-Assad is next.

"To the Syrian military: You are responsible for protecting the Syrian people, and anyone who orders you to kill women, children, and the elderly deserves to be tried for treason. No outside enemy could do as much damage to Syria as Bashar Al-Assad has done. Defend your country - rise up against the regime! -- Anonymous."

The bottom of the website featured links to anti-government sites, such as the Facebook-based "The Syrian Revolution 2011."

Protesters in Syria have been demanding reforms, including true democratic elections and an end to Assad's regime. Assad has been in power since 2000; his father, Hafez, ruled Syria for three decades. Demonstrators have been met by a government crackdown.

The Syrian Observatory for Human Rights, a London-based activist group, said more than 2,000 people -- mostly demonstrators -- have died since the uprising began in mid-March.

Anonymous has taken credit for attacks on various entities, including sheriffs' websites in the United States. It also said it carried out denial-of-service attacks on various Egyptian ministries during that country's revolution.