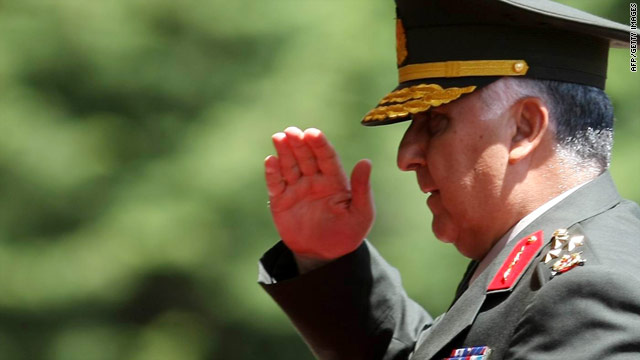 Their unprecedented departures were due to disagreements between the military and the government over the fate of officers in jail for allegedly taking part in plots to overthrow the ruling Justice and Development Party.

Following approval by President Abdullah Gul, his chief press adviser Ahmet Sever made the final decisions public. As expected, the former Gendarmerie Commander General Necdet Ozel will become the Chief of General Staff once the decision is made formal with cabinet approval. Ozel was appointed to this position in acting capacity Friday night to resolve the crisis that erupted before the council meeting.

Sever announced that General Hayri Kivrikoglu will be the new land forces commander, while Admiral Emin Murat Bilgel will become the head of naval forces and General Mehmet Erten will take over as the head of air forces. General Bekir Kalyoncu is appointed to lead the Gendarmerie.

About 200 soldiers, both retired and active-duty, are defendants in cases of alleged coup plots against Prime Minister Recep Tayyip Erdogan's government. There are high-level officers in jail among them who were in line for promotion.

Contrary to claims that these officers would be suspended or forced to retire, the military council extended their tenure for a year, which appears to be a compromise between the government and the military.

The Turkish military, the second largest armed forces in NATO, has always perceived itself as the guardian of the secular regime founded by Mustafa Kemal Ataturk in 1923. It has overthrown at least four civilian governments since 1960. However, its influence has been gradually declining since Erdogan's Justice and Development Party has been in power since 2002.

Since then, the generals, as well as other elements of Turkey's traditional secular establishment, have periodically clashed with Erdogan, whose party has its roots in political Islam.