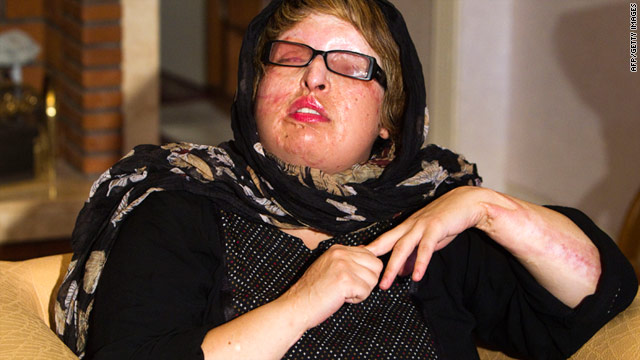 Ameneh Bahrami, who was blinded in both eyes after having acid hurled in her face, at her home in Tehran, on July 31.
STORY HIGHLIGHTS
RELATED TOPICS

Tehran, Iran (CNN) -- Iran's president is lauding a woman for pardoning a man who blinded and disfigured her in an acid attack, a gesture of forgiveness reflecting the spirit of the Muslim month of Ramadan.

"The act of altruism that occurred is an honor for us and the Iranian nation and caused many to learn a lesson from this move and to change," Mahmoud Ahmadinejad told acid victim Ameneh Bahrami on Wednesday, the president's office reported on its website.

An Iranian court convicted Majid Movahedi in 2008 of pouring a bucket of acid on Bahrami, after she had rejected his unwanted advances for two years. She had asked for retributive justice and the court ruled the attacker should be blinded with acid.

A physician was to drop the acid -- under legal supervision -- into Movahedi's eyes on Sunday to punish him for throwing acid in Bahrami's face, but she stopped the punishment minutes before it was carried out.

She told CNN two men were instrumental in bringing about her stance: a doctor at a clinic in Spain and Amir Sabouri, an Iranian who helped her get medical attention. Sabouri told her to forgive Movahedi and prove to the world that Iranians are kind and forgiving, she said.

She said she stopped the "eye for an eye" punishment for her attacker because "such revenge is not worth it."

This week marked the beginning of the holy month of Ramadan in the Islamic world, and pardons and commuted sentences commonly occur as a show of compassion leading into the holiday.

"Every good that remains in the world is the result of altruism and forgiveness," Ahmadinejad said.