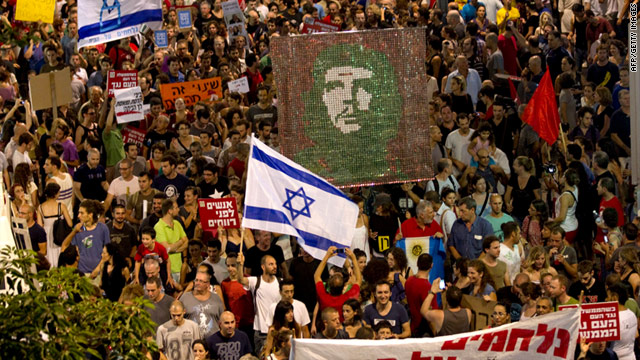 Tel Aviv, Israel (CNN) -- An estimated 50,000 demonstrators swept through the streets of Tel Aviv on Saturday night to rail against soaring housing prices in Israel.

Tens of thousands of others took to the streets in nine other cities across in the Jewish state, voicing similar sentiments, said Israeli police spokesman Micky Rosenfeld, who also provided the crowd estimate in Tel Aviv.

Saturday's protests were the latest and largest in a series of organized demonstrations, led by members of Israel's middle class, over high cost of living that have posed a serious challenge to Prime Minister Benjamin Netanyahu. Activists have set up tent cities across the country to demand affordable housing and protest against what they describe as social injustice.

"I think it's about time to say enough," Liran Gurbacha, a protester in Tel Aviv, told CNN. "They open too many doors for rich people to make their own rules, to take our money to get richer. This is a democracy, it should act like that."

While the majority of demonstrators were in their 20s and 30s, many senior citizens also came out to show their concern.

"When we were young and we left the kibbutz, we had nothing but we had hope," said Miri Gilat, noting that young Israelis work hard with minimal return. "Now the young people don't have any hope, and I cannot help them."

Hundreds of policemen have been deployed nationwide related to the demonstrations, there were no reports of problems or violence, authorities said.

The protesters themselves expressed support for police, saying they should have better pay and working conditions.

In a bid to ease the pressure, Netanyahu on Tuesday announced several measures aimed at increasing the number of affordable houses. But many activists remain unconvinced, with many demanding far more comprehensive steps.