U.S. official: Iraq 'less safe' than it was last year 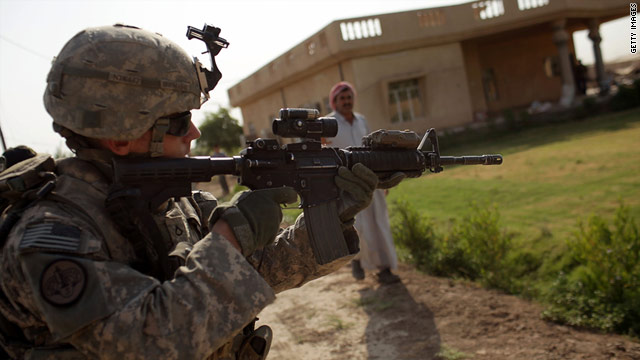 A U.S. soldier takes aim at a charging dog while on a patrol this month in Iskandariya, Iraq.
STORY HIGHLIGHTS
RELATED TOPICS

Baghdad (CNN) -- The U.S. official in charge of overseeing reconstruction in Iraq says the country is more dangerous than it was a year ago, a blunt assessment that comes five months before American troops are scheduled to leave.

"Iraq remains an extraordinarily dangerous place to work. It is less safe, in my judgment, than 12 months ago," said Stuart Bowen, special inspector general for Iraq reconstruction, in his agency's latest report to Congress issued Saturday called "A Summer of Uncertainty."

"Buttressing this conclusion is the fact that June was the deadliest month for U.S. troops in more than two years. Shia militias -- possibly armed and trained by Iran -- were responsible for some of the lethal attacks."

"They may have also been behind this quarter's increase in indirect fire on the International Zone," he said, referring to the American power center in Baghdad also known as the Green Zone.

The 44,000 remaining U.S. troops are scheduled to leave year's end according to an Iraq-U.S. security pact. But there have been discussions on whether to extend the deadline for a U.S. military presence.

And the details in the report give officials pause about whether they should withdraw all of the military personnel in what is a violent environment.

The report cites the deaths of at least 248 Iraqi civilians and 193 security forces in terrorist attacks between April and the end of June, and it said "more than 100 people were killed "in mass casualty suicide attacks" that struck every majority Iraqi city.

Government leaders, judges and security personnel have been targeted in attacks, strikes have been undertaken on provincial government facilities, and insurgents have launched attacks against the oil infrastructure, the report said.

Fifteen U.S. troops and a contractor for the U.S. Agency for International Development were killed in June.

Such groups attack Iraqi and American forces and "Iranian-backed" militants "want to give the false impression that U.S. forces are somehow being forced to leave." He also said al Qaeda in Iraq, the predominantly Sunni insurgent group, is a "determined and dangerous threat" even though it has been "degraded."

Buchanan said there has been an increase in daily attacks from the beginning of the year -- an average of 10 per day in February to 15 attacks per day in June and 13 per day in July.

At the same time, he said, these kinds of averages are dramatically lower than they were during the "the height of violence" when the war was in full swing several years ago.

He said Iraqi forces, with U.S. help when needed, are conducting "warranted operations against those responsible for suicide attacks, assassinations, attacks on Iraq's oil infrastructure and other activities related to sowing violence."

Meanwhile, al-Maliki said the Iraqi parliament will decide whether U.S. forces should "stay or not," according to a news release from his office.

Iraqi political leaders were unable to meet a self-imposed deadline over the weekend on whether to request U.S. troops stay beyond a planned end-of-the-year withdrawal, lawmakers told CNN.

The deadline imposed by President Jalal Talabani passed with lawmakers divided over how or whether to request an extension, raising questions about when Iraq may ask and whether it will be too late to turn around withdrawing troops. Al-Maliki said months ago that the White House would need to know Iraq's decision by August.

"Negotiations continue on this issue," the report said. "Whatever the decision, the outcome will significantly affect the ongoing reconstruction program, which is in the throes of a series of program transitions from the Department of Defense to the Department of State."