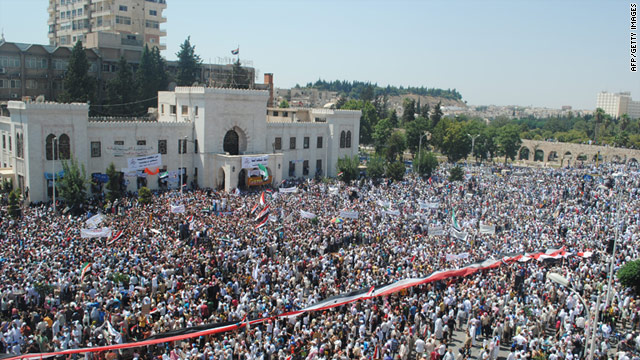 Syrians demonstrate against the government after Friday prayers in Hama on July 29, 2011.
STORY HIGHLIGHTS
RELATED TOPICS

(CNN) -- At least 23 people died Friday when demonstrations across the country were met by a fierce government crackdown, activists told CNN.

Seven fatalities occurred in the suburbs of Damascus and two in the city itself, six in Deir Ezzor and Boukamal, three in Daraa and one each in Lattakia and Hama, the activists said.

In addition, security forces killed three soldiers when they tried to defect; another 13 were wounded, the activists said.

Demonstrators chanting anti-government slogans marched in Damascus, Homs, Lattakia and other cities, and were frequently met by security forces who fired into the crowds and beat protesters, according to the Syrian Observatory for Human Rights.

The agency said some neighborhoods around Damascus, Hama, Homs and Idleb "saw gatherings" after Friday prayers but did not elaborate.

Heavy gunfire was also heard near the Abraham Mosque in a Damascus suburb and in the area of a protest in another Damascus neighborhood.

The group said it had also received reports of troops near mosques in several towns. A curfew had been imposed in Jabal al-Zawiya and people were not allowed to go to mosques. They had to pray in fields, instead, the group said.

CNN could not independently verify the reports.

Journalist Alexander Page, who said he was with protesters who were marching from Damascus' Midan neighborhood to Zahera, reported that he saw three people shot when security forces aimed into the crowd and fired. Four buses carrying "regime thugs and riot police" had arrived on the scene, and security forces were stopping cars and beating people, Page said.

The wounded were picked up by security forces and taken away in buses, Page said. He said a man on a motorbike filmed the faces of protesters as he drove past them. They chased and beat him, Page said.

In the Damascus suburb of Haja Al Aswad, heavy gunfire was heard as demonstrators departed Abraham Mosque. In another Damascus neighborhood, security forces dispersed hundreds of protesters who were chanting anti-government slogans.

Meanwhile, state media said a terrorist attack was to blame for an explosion in an oil pipeline in Tal Kalakh, about 160 kilometers (100 miles) north of Damascus.

The explosion happened around 4 a.m., according to the state-run news agency SANA and Syria TV. They described the explosion as a bombing and said it created a 15-meter (about 50-foot) crater.

Procedures were taken to stop the oil spill and prevent it from spreading into the water of Tal Hosh Dam, the governor said.

Syria has been wracked by violent government crackdowns on protests across the country since mid-March, when teens were arrested for writing anti-government graffiti in the southern city of Daraa.

As the clashes intensified, demonstrators changed their demands, from calls for freedom and an end to abuses by the security forces to calls for toppling the regime of President Bashar al-Assad.

Syrian opposition groups have held a number of meetings in Turkey in recent months. The last one, organized by the Syrian National Salvation Council, took place in mid-July in Istanbul.

The Syrian Observatory for Human Rights says that since the unrest in the country began, 1,513 civilians have died. It put the toll among government forces at 367, not including Friday's fatalities.