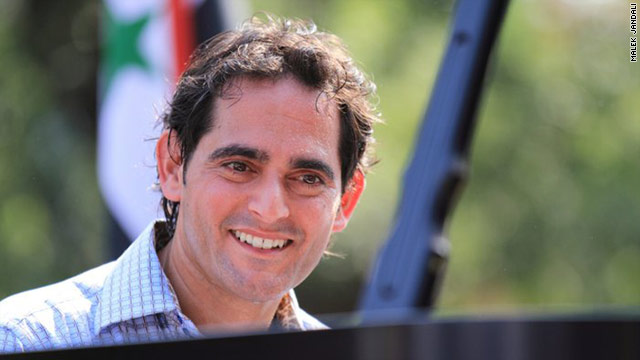 Musician Malek Jandali has backed the opposition in Syria during the current wave of anti-government demonstrations.
STORY HIGHLIGHTS

(CNN) -- Malek Jandali, a pianist who performed last week at a rally in Washington in support of the Syrian opposition, blamed his work for what he said was an attack Thursday night by government security forces on his parents.

The father, Dr. Mamoun Jandali, 73, was carrying groceries from his car to his home in Homs when a man grabbed him from behind and asked him to help care for someone who had been injured, Jandali told CNN Friday in a telephone interview from Orlando, Florida.

When the doctor agreed to do so, the man spoke into his cell phone and said to bring the patient. Moments later, two other men showed up unaccompanied by any patient. They handcuffed the doctor, covered his mouth and nose with duct tape, then took him upstairs, Jandali said. The musician's 66-year-old mother, Linah, was in bed.

"All of a sudden, she finds two men attacking her while the guy was holding my dad and ordering the other two to beat my mom in the head and eyes," Jandali said. "My dad, he couldn't do anything other than watch this atrocity."

The three men broke his mother's teeth and beat his father, then locked them both in their bathroom and ransacked the house, their son said. After the attackers had departed, the father, who had held on to his cell phone throughout the ordeal, called relatives. He had to call security forces to remove his handcuffs.

The doctor then sewed shut a cut in his wife's face, said Jandali.

Jandali said his performance in Washington had provoked the attack. During his mother's beating, "they were telling her that ... 'we're going to teach you how to raise your son.'"

Jandali, 38, said he will ignore threats and go forward with his planned concert Saturday in Lake Buena Vista, Florida.

CNN could not independently verify the account provided by the musician, who said he learned of the incident in a phone call with his parents.

Jandali, who is a U.S. citizen, said he hoped his music would bridge the gap between nations by promoting harmony, peace and understanding. His most recent work, which has captured international attention, is "Watani Ana," which means, "I am my homeland."

"It's just basically a song that asks for freedom and dignity for any nation anywhere any time," he said. "It can apply to Cuba, Syria, Egypt, Palestine. I did that on purpose because I wanted my musical message to be universal in all mankind."

Syria has been wracked by violent government crackdowns on protests since mid-March, when teens were arrested for writing anti-government graffiti in the southern city of Daraa.

As the clashes intensified, demonstrators changed their demands, from calls for freedom and an end to abuses by the security forces to calls for toppling the regime of President Bashar al-Assad.

"It has been a rollercoaster ride for me," Jandali said. "Let me add this: Freedom is never free. The American people paid for their freedom. This is what we enjoy today. And this is the time for other nations to pay the price so they can be free."

The Syrian Observatory for Human Rights says that since the unrest in the country began, 1,513 civilians have died. It put the toll among government forces at 367, not including Friday's deaths.