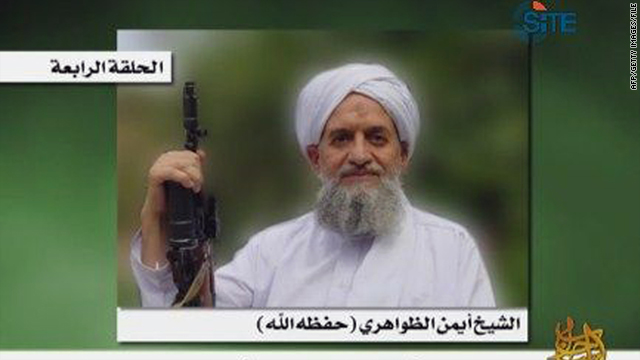 Ayman al-Zawahiri as seen in a photo obtained March 3 when an earlier audio speech by him was posted on jidhadist forums.
STORY HIGHLIGHTS

(CNN) -- The new head of al Qaeda describes Syria's president as "the leader of criminal gangs, the protector of traitors," and applauds anti-government protesters seeking to topple him, in a video that appeared on extremist websites this week.

But one prominent Syrian activist, Loay Hussein, rejected the praise of the terror network's leader, Ayman al-Zawahiri, telling CNN "we will not permit him or his organization to toy with our revolution and our movement."

"Syria is not a playground for jihad," said Hussein, who said he wouldn't be surprised if the regime exploited the message to escalate its crackdown against anti-government protesters.

Al-Zawahiri's message is believed to be his first since he was named leader of the terror network, following the death of former leader Osama bin Laden in a U.S. raid in Pakistan in May. CNN could not independently verify its authenticity.

Al Qaeda on the brink of collapse?
RELATED TOPICS

In the video, the bespectacled 60-year-old, dressed in a white robe, gestures and points with his finger as he speaks. He uses the seven-minute video, which first appeared Wednesday, to discuss Syria and address the protesters seeking to oust President Bashar Al-Assad. The protests have sparked a bloody government crackdown in various cities, according to witnesses.

"Oh free people of Syria and its mujahedeen," the al Qaeda leader said. "It is better for you not to ally yourself with the colonialist powers of the world and the new crusades."

Al-Zawahiri said the United States changed its stance on Syria after similar uprisings led to the ousting of the longtime leaders of Tunisia and Egypt.

"America, which had committed itself to Bashar for the length of his rule, announces today that it stands with you," Al-Zawahiri said. "After what it saw and the ground shook from the thunder of your rage and after it was devastated by the loss of its two biggest agents in Egypt and Tunisia."

The terror leader accuses the United States of planning to replace al-Assad with someone who protects Israeli interests.

"Today Washington seeks to put in the place of Assad who loyally protected the Zionist borders, another regime against your revolution and jihad with a government that follows America and cares for the interest of Israel."

Al-Zawahiri, the longtime deputy to bin Laden, took over leadership of al Qaeda in June. In the video, he does not make a reference to his new leadership role or the death of bin Laden.

The video was produced by As-Sahab, al Qaeda's media arm, and the graphic at the beginning of the piece states it was shot in the Islamic calendar Rajab 1432 which is between June 3 and July 1. CNN cannot independently verify the accuracy of this date.

The new leader was indicted for his alleged role in the 1998 bombings of the U.S. embassies in Tanzania and Kenya that killed 224 civilians and wounded more than 5,000 others.

The FBI has a $25 million reward for information leading to his capture, the same amount it had for bin Laden.

Loay Hussein, a prominent rights leader and member of the opposition inside Syria, was a political prisoner from 1984 to 1991. He said al-Zawahiri and other militants "want a foot in Syria because it is a strategic country that can serve many of their interests."

"Al Qaeda is already in Yemen, but in Syria, al Qaeda has no stronghold so it would like to gain one," he said.

"Al Zawhiri is trying to enter the picture and pretends he has credibility with ranks of demonstrators on the streets of Syria. This will be a failed attempt because the youth of Syria's revolution have no interest in the jihadists of al Qaeda."

Protesters have been demonstrating across Syria after Friday Muslim prayers, but Hussein said Zawahiri is kidding himself if he thinks al Qaeda's "jihadist Islam" is backed by people just because they march after leaving mosques.

"In Syria there is a forgiving Islam that does not accept killing or violence. None of the chants in the streets refer to a religious goal, all our aspirations are nationalistic," Hussein said.

Hussein does think that the Syrian government may use the statement "as an excuse to ramp up its crackdown on the protesters."

"I would not be surprised if in a few days Syrian State TV begins to claim that jihadist members of al Qaeda are responsible for killing civilians to send even more security to raid our homes and villages."