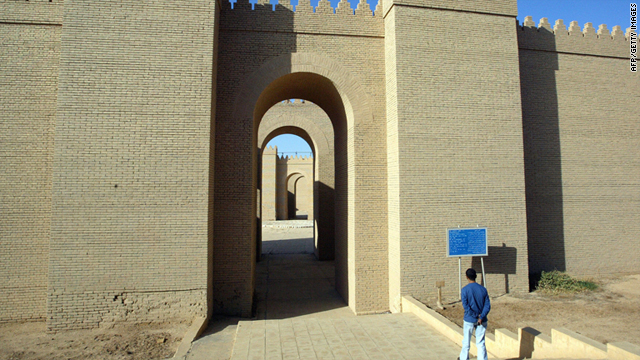 (CNN) -- Known to many as the "cradle of civilization," Iraq is a treasure trove of important archaeological sites including Babylon, Ur and Nimrud.

Yet hostile circumstances on the ground have left the country's antique heritage vulnerable to looting and damage.

International calls for the safeguarding of Iraq's ancient sites have resulted in the development of a sophisticated geodatabase record of ancient sites and monuments, which it is hoped will allow them to be better monitored and protected.

MEGA-Iraq (Middle Eastern geodatabase for heritage) is being developed by the Getty Conservation Institute and the World Monuments Fund alongside Iraq's State Board of Antiquities and Heritage.

Susan Macdonald is Head of Field Projects at the Getty Conservation Institute.

The map interface is really useful to be able to understand the physicality of a site
--Susan MacDonald, Getty Conservation Institute

She said: "While many in the international archaeological community focused on the looting of museums, no-one was really paying much attention to this issue of archaeological sites, and that really there was no good inventory or database of records of these."

Using Google's freely available satellite imagery as a base map, she said, MEGA allows users to focus on particular archaeological sites, see a terrain map or an aerial view of the site and surrounding buffer zones, and scan in to access details of the site's features.

Because of the visual nature of the geodatabase, users will have an accurate picture of the condition of a site at a given time and therefore be able to pinpoint any changes in its condition, according to Macdonald. Also, newly discovered sites, usually most vulnerable to looting, can be quickly input into the database.

An earlier project was abandoned in 2007 because of the dangerous situation on the ground in Iraq. That project was transferred to Jordan in collaboration with the country's Department of Antiquities and MEGA-Jordan is today live and actively used.

According to Jeffrey Allen, a consultant for the World Monuments Fund, timing is crucial to the success of the project. "We're now trying to implement the system in much more difficult circumstances (than in Jordan), but it's probably easier to do it now in Iraq than it would have been previously," he said.

Developing MEGA now, he continued, will help ensure that as the country starts to rebuild itself, future infrastructural plans won't encroach on existing archaeological sites.

While many countries have electronic archaeological databases, Macdonald said, MEGA is different in that it uses open-source software, is accessible online, requires minimal specialist training to use, and is multi-lingual.

"The real power of it comes when (many) people are using it," she said, adding that ministries and local governments across Iraq would potentially have access to it.

MEGA has been met with applause from archaeologists across the globe.

Dr. Lamia al-Gailani-Werr is an Iraqi archaeologist and consultant for the Ministry of Culture there.

She said: "I think (the database) is essential. It depends on the political situation because Iraq is still not stable enough for archaeologists to go everywhere but I think it's very good to do."

She is working on a computerized inventory of objects in the National Museum, which will further help Iraq's State Board of Antiquities and Heritage know what it has and help in protecting it.

The extent of illegal antiquities trade is hard to gauge, according to Interpol's website, often because items aren't known to be lost until they appear on the art market and because of the dearth of detailed inventories of items in countries such as Iraq.

"The fact is, every country ought to have a database for their archaeological sites," said John Curtis, Keeper of the Middle East collections at the British Museum in London.

While theoretically MEGA has the potential to be linked up to collections inventories, Curtis stressed that it is "a survey of sites in Iraq, not objects, it's not specifically going to help tracking lost items.

"What it might do is help them be protected in the future," he added.

Julian Radcliffe, chairman of The Art Loss Register, an international database of stolen and missing works of art and antiquities, agreed, saying: "On its own it wouldn't do much to stop looting, but that's true of many initiatives. Nobody's got a silver bullet for this."

What is constitutes, he said, is a useful starting point, an important measure among many that will help organizations such as his own and Interpol track down lost items.

"If there has been recent looting from a particular site revealed by this new MEGA database, then we would be alerted to the fact that we should look for items of the type that will have come out of that site," he explained.

"Therefore we would say, when we see an item that we're suspicious of, I wonder whether it came from that site," he said.

And according to Allen of the World Monuments Fund, there is one other reason that MEGA will be important to the people of Iraq.

"I just think (it's) going to help people have more respect for their cultural heritage because they can commodify it and they can measure how much they have in a much better way," he said.