9 killed in attacks on Shiite holy city in Iraq 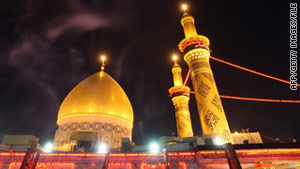 Many Shiite pilgrims have started walking to Karbala, home to a shrine honoring the grandson of the Prophet Mohammed.
STORY HIGHLIGHTS

An additional 70 people were wounded in the three blasts between Friday and Saturday, the Interior Ministry officials said.

A motorcycle rigged with explosives detonated in southern Karbala Saturday morning, killing one and wounding 27 others.

In a second attack, two car bombs exploded Friday afternoon within a few seconds in the Awan district north of Karbala. Two died and 15 were injured.

All the attacks targeted Shiite pilgrims heading to Karbala to mark the Shabaniya, the birthday of the 12th and last Imam, Mohammed Ibn Hassan al-Mahdi. Since 2003, thousands of Shiite pilgrims have been killed and wounded in explosions and assassinations.

Shabaniya falls on Sunday but many pilgrims have already started walking to Karbala, about 100km (62 miles) south of Baghdad.

No group claimed responsibility, but such attacks bear the hallmark of al-Qaeda in Iraq, said an Interior Ministry official who spoke on condition of anonymity because he is not authorized to speak to media.