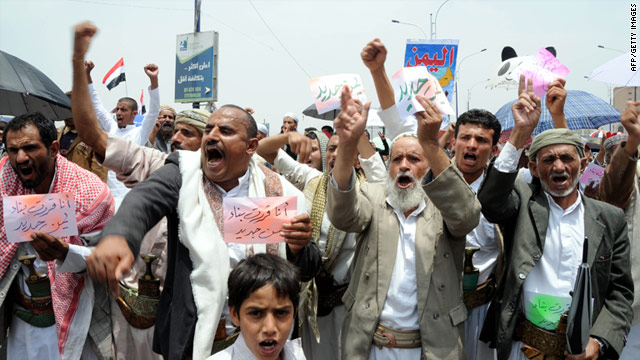 (CNN) -- Supporters of Yemen's embattled president converged overnight Monday on a central square in Hodeidah and killed an anti-government protester and injured more than 150 others, according to witnesses and a medical team member.

The fighting around the western Yemeni city's Change Square was the bloodiest since May, and comes as tensions remain high between those who support President Ali Abdullah Saleh and those who have been demanding his ouster for months.

A member of a medical team that is based in Hodeidah's square said at least 34 people were shot in the violence, while more than 40 others were stabbed. This source, like others around Yemen, was not named in order to protect his safety.

One protester, hurt when a rock was thrown at his head, said that he and others saw attackers "come in using governmental vehicles and leave using the same vehicles. The government did not announce that its vehicles were stolen, so (we believe) it is behind the attacks."

"This is expected from a regime that only kills its people to stay in power," he said.

However, a Yemeni ruling-party official denies that the government supported the gangs and thus is behind the violence.

"The attackers had no links to the government, and the claims of the protesters are unacceptable," said Zaid Thari, a political adviser for the General People's Congress party.

Witnesses said the attack was launched late Sunday and continued for more than four hours into Monday.

After the clashes concluded, others in Yemen reported continued demonstrations -- in part to condemn the earlier attacks -- in Hodeidah and 12 provinces around the Arab nation.

And on Monday night, heavy shooting was reported in the city of Taiz. A medical staff member in that city's Freedom Square, as well as eyewitnesses, said that two protesters had been injured in the clashes.

A loyalist to Saleh -- who is still in Riyadh, Saudi Arabia, where he is recovering from an attack last month on his compound -- said earlier from Hodeidah that he and others will fight to the last man to ensure that there's no turnover in government.

The pro-Saleh follower said the attacks in Hodeidah, Yemen's fourth-largest city and an important port, could simply be a precursor to more violence should there be a major political transition.

"We will show the opposition what we are capable of doing if it insists on taking President Saleh out of power," the follower said.

John Brennan, U.S. President Barack Obama's top counterterrorism adviser, on Monday met in Sanaa with Yemeni Vice President Abdu Rabu Mansoor Hadi, according to a report from Yemen's official Saba news agency. Hadi is officially the nation's acting leader, though Saleh has indicated his intention to return to his homeland.

A day earlier, Brennan met with Saleh on Sunday at a military hospital in Riyadh. Video of the meeting shows Saleh wearing a suit jacket, his face still singed from the June 3 blast.

Brennan wished Saleh "a speedy recovery" but also "emphasized the importance of resolving the political crisis in Sanaa," the White House said in a statement on Sunday's meeting. He urged Saleh to sign the Gulf Cooperation Council's political transition plan for Yemen, one that mandates that the president leaves the post he has held for 21 years.

Saleh has voiced agreement with the plan brokered by the regional council, but he has not signed it.

Thari, the ruling party adviser, said anti-government demonstrators are afraid such a power transfer will never take place, especially in light of reports that Saleh appears to be recovering. That is why, he said, some activists are blaming the government for violence like what happened Monday in Hodeidah -- an accusation, he claims, has no merit.

"The government has no benefit in attacking the protesters," Thari said.