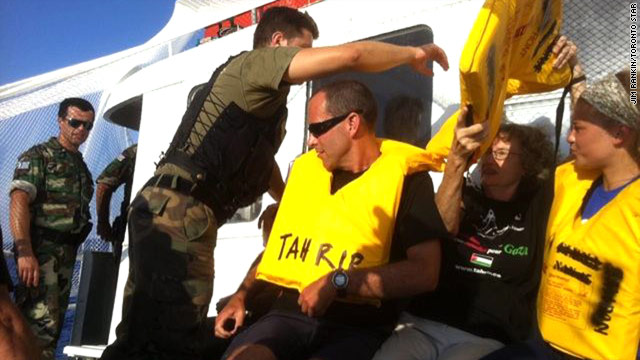 Activists sit onboard the Gaza-bound the Tahrir while it commandeered and towed by Greek Coast Guards.
STORY HIGHLIGHTS

Athens, Greece (CNN) -- One of the ships in a Gaza-bound flotilla blocked by Greece tried to flee on Monday and was stopped by the Greek Coast Guard.

Greece called for the immediate arrest of the ship's captain, but organizers on the ship insisted they no longer had a captain.

In a tweet, organizers said "extreme damage" was done to the Canadian ship, the Tahrir. "When commandeered & towed by Greek Coast Guard it was slammed into a concrete wall," the tweet said, adding that the ship was "taking on water."

They also tweeted that the travelers on board "moved up on deck are in good spirits and are not leaving the boat."

Earlier in the day, the ship tweeted that it was "casting off from Greece."

"The Tahrir is leaving port in Crete, and we are breaking through Israel's Gaza blockade which now extends to Greek ports," organizer David Heap said in the statement.

The ship's Twitter feed carried a tweet from a journalist on board, Jim Rankin, saying kayakers were blocking the Coast Guard, and the Canadian boat had left the harbor.

Minutes later, the ship tweeted, "We got about 5km (3.1 miles) away from shore. Greek authorities have taken over the boat and appear to be heading back to port."

Rankin tweeted that no one was injured in the Greek takeover of the boat, and delegates were "non violent in blocking wheel house."

The Greek Coast Guard issued a statement saying, "The Tahrir tried to leave the port of Agios Nikolaos in Crete without permission. The Coast Guard has intercepted the ship and it is now being taken back to the port. As a result the prosecutor's office has already asked for the immediate arrest of the captain. It is not clear if this will be extended to other passengers on board. There are an estimated 40 people aboard the ship."

But the ship tweeted, "We left port without a captain. We released captain and crew from contract and sailed under control of international volunteers." No further details were given.

"Our boat is surrounded by Greek police, tied up at port. Supporters from town are chanting, 'Free Gaza, Free Greece,' " the ship tweeted.

The Tahrir was brought to the port of Agios Nikolaos on the Greek island of Crete.

The Tahrir is one of 10 ships trying to head to Gaza despite Israel's maritime blockade.

Last week, the Greek Coast Guard intercepted a U.S. ship in the flotilla, the Audacity of Hope, about 10 minutes after it left Perama, triggering an hours-long standoff.

The ship -- full of activists but no humanitarian aid -- was ultimately tied up at a Greek naval facility, and its captain, John Klusmire, was arrested. The Coast Guard said Klusmire had left the mainland without permission and put passengers in danger. He will appear before Greek prosecutors on Tuesday.

Greece's foreign ministry released a statement Sunday afternoon in which it proposed to "undertake the task of transporting the humanitarian aid, with Greek vessels or other appropriate means, through existing channels."

Foreign Minister Stavros Lambrinidis talked by phone with U.N. Secretary-General Ban Ki-moon, who thanked Greece and expressed support for the initiative, according to a U.N. statement.

"In his view, it could help to reduce tensions in the region and ensure much-needed aid is delivered to those who need it in Gaza," the U.N. statement said of Ban's views, adding the world body will "work closely with Greece, Israel and Palestinian authorities on this matter."

But Chief Palestinian Negotiator Saeb Erakat said Sunday that funneling food, cement and other goods via other means, such as Greek ships, missed the point, which he said is to "immediately lift, not ease" Israel's maritime blockade of Gaza. He lauded those behind the flotilla as people "who have dedicated their time, effort and passion for a just cause."

Israel says its blockade is necessary to try to halt the shipment of weapons into Gaza. Militants in Gaza have launched numerous deadly attacks against Israelis. The territory is run by Hamas, which has carried out dozens of terrorist attacks and is listed by the United States as a terrorist organization.

Israel also emphasizes that it delivers large amounts of aid to Gaza. The country has mounted a diplomatic offensive to try to stop the flotilla from setting sail.

The Israeli government said flotilla participants had threatened to kill Israeli military personnel should their boats be boarded. Israeli officials alleged that the participants were stockpiling sacks of sulfuric acid on boats to be used in the event of any attacks on Israeli commandos.

Flotilla organizer Medea Benjamin dismissed the allegations as ludicrous on June 28, saying, "They see this nonviolent, ragtag group of ships as such a threat they're using their entire propaganda apparatus, and their diplomatic and economic clout to try to stop 300 peace activists. It's pathetic."

The Middle East Quartet -- composed of officials from the United States, United Nations, European Union and Russia -- issued a statement Saturday asking "all governments concerned to use their influence to discourage additional flotillas, which risk the safety of their participants and carry the potential for escalation."

The Quartet added that it "strongly urges all those wishing to deliver goods to the people of Gaza to do so through established channels, so that their cargo can be inspected and transferred via established land crossings." Doing so, the group contends, is the best way to both help Palestinians and address Israel's "legitimate security concerns."

Erakat said that while Palestinian leaders "support international engagement in lifting the unjust and inhumane Israeli blockade," the Quartet's statement and their opposition to the planned flotilla to Gaza skirt the broader challenges in the region.

"We invite them to focus on resolving the root cause of the conflict, which is the occupation, rather than seeking ways to manage its destructive symptoms." Erakat said.