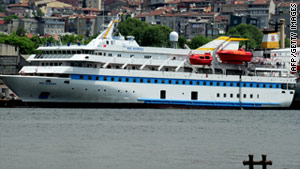 In May 2010, the Mavi Marmara and five other aid ships were on their way to Gaza when Israeli soldiers boarded it.
STORY HIGHLIGHTS
RELATED TOPICS

Jerusalem (CNN) -- The Israeli foreign ministry on Sunday rejected as "ludicrous" suggestions that Israel and the United States were using economic pressure to force fiscally strapped Greece into preventing boats from participating in an international flotilla to Gaza.

"Do these people have any proof whatsoever to such claims?" asked Israeli foreign ministry spokesman Yigal Palmor. "Their entire activity is aimed at demonizing the state of Israel. What are they saying, that we have used all the Jewish bankers in the world to cancel Greece's bonds? What kind of fantasy world are they living in?"

Organizers of one boat planning to join the flotilla, the U.S.-registered Audacity of Hope, released a statement Sunday asking the Greek government to explain why the leased vessel was being prevented from leaving a Greek port.

Passengers and crew say they are being told the boat cannot depart because of concerns about its seaworthiness and the need for further inspection.

Trip participants rejected the explanation, claiming the boat was safe. They suggested economic pressure was being brought to bear on Greece.

"Israel has said openly that it is pressuring governments to try to stop the flotilla, and clearly Greece is a key government since several of the boats plan to leave from Greece" passenger Medea Benjamin said in a news release by the boat's organizers. "It is unconscionable that Israel would take advantage of the economic hardship the Greek people are experiencing to try to stop our boat or the flotilla."

In the news release, the boat organizers -- U.S. Boat to Gaza -- suggested without offering proof that political leverage was being used with the International Monetary Fund in a bid to compel Greece to block flotilla ships from departing.

Palmor acknowledged that Israel was using diplomatic channels to prevent what he called "an illegal flotilla" from arriving in Gaza.

"These are diplomatic contacts with friendly countries" Palmor said. "As for their claims, they are knowingly and proudly commit an illegal act and still have complaints? Their accusations are simply ludicrous."

Meanwhile, the director of Israel's government press office, Oren Helman, sent a letter Sunday to Israel-based foreign journalists warning that "participation in the flotilla is an intentional violation of Israeli law and is liable to lead to participants being denied entry into the State of Israel for 10 years, to the impoundment of their equipment, and to additional sanctions."

"I implore you to avoid taking part in this provocative and dangerous event, the purpose of which is to undermine Israel's right to defend itself and to knowingly violate Israeli law," Helman wrote.

The Foreign Press Association, which represents international journalists working in the region, responded that the government's letter threatening punishment for media coverage of the flotilla "sends a chilling message to the international media and raises serious questions about Israel's commitment to freedom of the press."

"Journalists covering a legitimate news event should be allowed to do their jobs without threats and intimidation," the Foreign Press Association said in a statement. "We urge the government to reverse its decision immediately."

The flotilla, expected to sail soon, intends to challenge Israel's maritime blockage of the Gaza Strip.

According to organizers, the flotilla is meant to commemorate the one-year anniversary of a similar flotilla that resulted in a clash in international waters with Israeli navy commandos that killed nine people -- including an American citizen.

In May 2010, the Mavi Marmara -- owned by the Turkish Humanitarian Relief Foundation, or IHH -- and five other ships were on their way to Gaza with humanitarian aid and about 700 activists from various countries when the Israeli soldiers boarded it.

An independent Israeli commission, led by retired judge Yaakov Turkel, later found that the Israeli commandos "acted professionally and in a measured manner in the face of unanticipated violence" when they seized the Gaza-bound aid ship.

Secretary of State Hillary Clinton told reporters Friday that she didn't think the flotilla plan for this year "is useful or productive or helpful to the people of Gaza."

"We have certainly encouraged that American citizens not participate in the flotilla," she said, "and we are urging that all precautions be taken to avoid any kind of confrontation."

Clinton's comments followed an even harsher statement by State Department spokesperson Victoria Nuland, in which she criticized what she called "irresponsible and provocative actions that risk the safety of their passengers."