Yemen's president should stay in Saudi Arabia for a while, doctors say 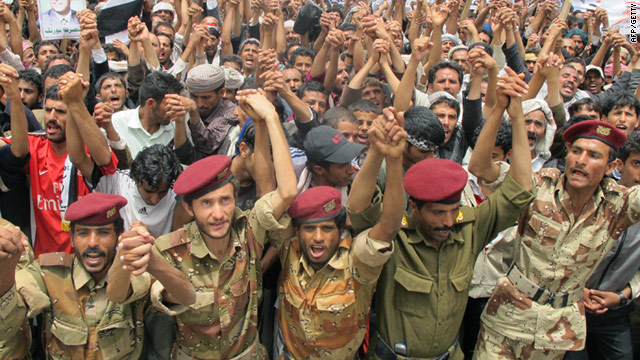 Members of the Yemeni security forces join anti-government protesters during a demonstration in Sanaa on June 20.
STORY HIGHLIGHTS
RELATED TOPICS

(CNN) -- The health of Yemen's wounded president is improving, but doctors are recommending that he stay in Saudi Arabia for a "longer time" to recover, an adviser said Friday.

This came as thousands of anti-government protesters demonstrated across Yemen and five people died in an explosion at a military checkpoint in Aden.

Yemeni ruling party officials had been saying that President Ali Abdullah Saleh would return home Friday from Saudi Arabia, where he was taken for treatment after he was wounded in a June 3 attack on the country's presidential palace.

"Doctors recommended that President Saleh stays in Saudi Arabia for a longer time. They said that Saleh's health is improving," said Ahmed Al-Soufi, a senior presidential adviser in Yemen.

"The health of President Saleh is important to us, and we hope he will be here within days."

Demonstrators chanted, "The people reject U.S. interference" and "the revolution will prevail."

"We want the revolution to succeed, and the U.S. is not making this possible," said Sabreen Ariki, a leading figure in the Youth Revolutionary Movement in Taiz. "It is killing the revolution, but we want to tell them that we will continue protesting until our demands are met."

Members of the Revolution Youth Organizing Committee, one of the groups in the Youth Revolutionary Movement in Yemen, condemned Saudi Arabia and the United States for what they said was the negative influence both countries are having on Yemen and promised that the countries' stance against the revolution will not be forgotten.

"It has become clear that the Saudi stance is against the will of the people and they are seeking their own interests while ignoring the interests of the Yemeni people," said Waseem Qirshi, a committee representative.

In Sanaa, tens of thousands of Saleh followers gathered in support of him, demanding that the international community respect its constitutional president and not violate the Yemeni Constitution.

In New York, members of the U.N. Security Council expressed "grave concern" Friday about the deteriorating security and humanitarian situation in Yemen.

"They urge all parties to show maximum restraint and to engage in an inclusive political dialogue," the council said in a statement after receiving a briefing on the situation. The Mission of the U.N. High Commissioner for Human Rights will visit Yemen from June 27 until July 6.

Investigators are probing the June 3 attack on the mosque in Yemen's presidential palace, which occurred when Saleh and other senior officials were attending Friday prayers. There were deaths and injuries in the attack, and Saleh was among several people taken to Saudi Arabia for medical treatment.

Meanwhile, four soldiers and a civilian were killed when a bomb-laden vehicle exploded Friday at a military checkpoint in Aden, a security official there said. The official asked not to be named because he is not authorized to speak to the media.

The official said the attack took place about 500 meters from a military compound where many of the army's tanks are located.

Yemen has been wracked by unrest for months as protesters have demanded an end to Saleh's rule. In recent weeks, government troops have battled both anti-government tribal forces and Islamic militants, including al Qaeda in the Arabian Peninsula.

The violence has led many people to flee their homes. Close to 45,000 people in southern Yemen have been displaced, particularly in Aden, Lahj and Abyan provinces, the U.N. Office for the Coordination of Humanitarian Affairs estimated this week.