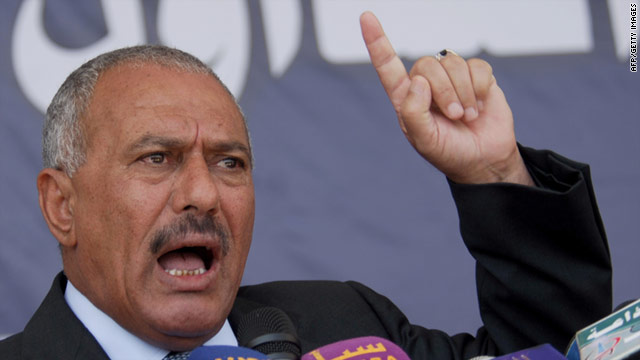 (CNN) -- Yemeni President Ali Abdullah Saleh, who is being treated in Saudi Arabia after an attack on his compound, will return to Yemen on Friday, senior adviser Ahmed Al-Soufi told CNN.

The ruling GPC party said the president will be received by celebrations, but anti-government demonstrators throughout the country likely would not welcome his return.

The clashes have been in the Al-Hoban and Kalabah areas of the city, approximately 1 kilometer (half-mile) west of Freedom Square, according to eyewitnesses. Residents also report hearing gunfire in the city.

The protesters are demanding that Saleh leave office, and there were celebrations in the streets when he left for treatment.

"Saleh's arrival back to Yemen is not a surprise; we said all along that he is traveling for medical treatment and, like any other president in the world, is expected to be back to his country and continue with the role of leadership," said Yasser Al-Yamani, a senior Saleh aide.

Al-Soufi said Saudi doctors have given Saleh the green light to return home.

"When he is back, he will rule as normal and the country will continue to be under his control. Saleh will return strong and the will of the people will stand against any other will," he said.

Saleh will rule until the end of his term in 2013, Al-Soufi added.

"The ruling party are experts in lying and that is why we are not taking their comments seriously," said Hasan Zaid of the opposition Haq party.

Khaled Al-Anesi, prominent Yemeni rights activist and a leading figure in the youth revolutionary movement, said the "youth are now coordinating with the political powers here in Yemen in preparation for the post-Saleh era" and noted that it is "impossible for Saleh to come back."

"The youth have the backing of the international community and the Saleh era is over," he said. "Yemenis will not allow Saleh back in Yemen and he is smart enough to know that he is not wanted anymore and that Yemenis have decided to live without him."

Wassem Al-Qirshi -- representative of the revolution youth organizing committee, the largest of the groups that comprise the youth revolutionary movement -- said "the youth want to coordinate and create a transition council but we are trying to involve all political factions in the process except the ruling party."

In Washington, State Department spokeswoman Victoria Nuland said at the briefing Tuesday that she was not aware of reports that Saleh planned to return to Yemen Friday.

But she added, "Whether he stays in Saudi Arabia, whether he goes back, our request is the same: He needs to sign the GCC agreement and we need to move on with the transfer to a more democratic, progressive Yemen."

Saleh had voiced agreement with the plan by the Gulf Cooperation Council, a group of six Persian Gulf states, for his gradual departure, but he refused to sign it.

Government forces have been locked in conflict with al Qaeda's Yemen wing, and authorities fear the group, called al Qaeda in the Arabian Peninsula, is exploiting the political instability. It has a strong presence in southern Yemen.

Many people have fled their homes because of violence. Close to 45,000 people in southern Yemen have been displaced, particularly in Aden, Lahj and Abyan provinces, the U.N. Office for the Coordination of Humanitarian Affairs estimated this week.