Lawyer: Mubarak's health 'getting worse' as he battles stomach cancer 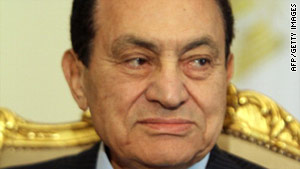 "He has cancer in the stomach, and it's getting worse," said Farid El Deeb, the lawyer for Mubarak and his family.

The news on Mubarak's condition comes five weeks ahead of his and his two sons' criminal trial. Mubarak, who stepped down amid intense domestic and international pressure earlier this year, is accused of ordering police officers to use live ammunition to kill protesters on January 25 in Cairo's Tahrir Square.

The former president could be executed if he is convicted of ordering killings, Egyptian Justice Minister Mohamed Abdelaziz al-Juindy has said. El Deeb has said Mubarak is "very sad and sorry" about the allegations, but has no regrets and denies giving any kind of authorization to fire on demonstrators.

Mubarak has been held in Sharm el-Sheikh International Hospital in the Red Sea resort community since mid-April after complaining of heart palpitations. Egyptian prosecutors said earlier this month that the former leader is too ill for transfer to a prison hospital in Tora, concluding that the hospital cannot accommodate Mubarak's needs.

That operation was kept secret, with even top government aides unaware of the procedure, El Deeb said.

Buchler, chairman of the surgery department at a hospital in Heidelberg, said Mubarak should receive a comprehensive follow-up every four months for two years after the surgery.

"But the follow-up was completely ignored," El Deeb said.

According to the general prosecutor, six doctors affiliated with Egypt's military were dispatched to see Mubarak at the Sharm el-Sheikh hospital and released a report on May 24.

A week later, on June 1, Egyptian prosecutors released a statement that said Mubarak had repeated irregular heartbeats that, combined with low blood pressure and an "instant drop in blood circulation in the brain ... leads to instant unconsciousness." The report also found the former president had an increased risk of heart attack and suffered from depression, fatigue and muscle weakness.

Dr. Mohamed El Deeb, a member of the presidential palace medical team who had accompanied Mubarak to Germany for his surgery, asked Buchler if he would visit Mubarak in Sharm el-Sheikh. And the family lawyer, also named El Deeb but no relation to the doctor, said he submitted an official request Thursday asking for permission for the German surgeon to check on Mubarak.

Prosecutors forwarded the request to Mohammed Tantawi, head of the ruling military council, "but we have not heard back from them yet," said El Deeb, the lawyer.

Egypt's ruler for 30 years, Mubarak stepped down February 11 after an 18-day uprising in which pro-democracy protesters demanded a change in government and reforms. He and his family have been under investigation since the Supreme Council of the Armed Forces and Prime Minister Essam Sharaf's caretaker cabinet took over.

All three are scheduled to be tried at Cairo Criminal Court on August 3, Saeed said.

Aly Hassan, a judicial analyst affiliated with Egypt's justice ministry, recently said Egyptian courts can proceed with a trial even if a defendant is in poor health.

"In previous cases, suspects appeared in court with life-support machines, so Mubarak's health does not mean he is paralyzed," Hassan said. "If he has heart problems and doctors indicate improvement, then he can appear in court for several hours."