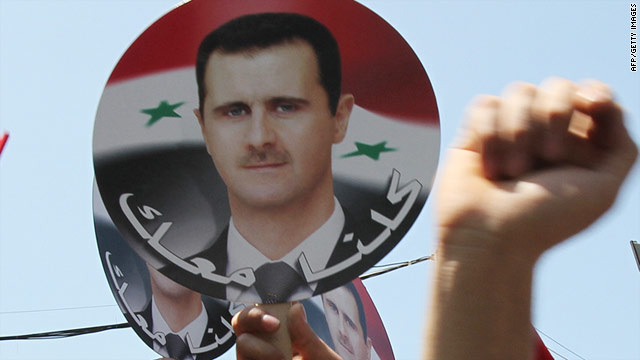 Lebanese citizens and Syrians living in Lebanon hold pictures of Syrian President Bashar al-Assad during a rally outside the Russian embassy in Beirut on Sunday in support of Assad's regime.
STORY HIGHLIGHTS

(CNN) -- Dozens of children called for freedom, held anti-government signs and criticized President Bashar al-Assad in at least two Syrian cities on Sunday, a day before al-Assad planned to make another speech to the unsettled nation.

In a video posted on YouTube, showing a demonstration the cameraman claims took place Sunday in the Damascus suburb of Kaboon, dozens of mostly young people walk down a street brandishing signs, chanting and in some cases wearing party hats with messages on them. They are joined by a handful of adults, including one man who puts a boy on his shoulders as they march.

Another YouTube video, purportedly from the coastal city of Latakia, shows a group of young boys clapping and voicing anti-government sentiments. One boy leads the chants, with no adults visible.

The repeated phrases range from the patriotic "Long live Syria" to others targeting Syria's leader with slogans like "Bashar al-Assad go away" and "The people need the fall of the regime."

An opposition activist, who spoke to CNN from Syria on condition of anonymity, said that such demonstrations have become a daily ritual in the Middle Eastern country, with children embracing their parents' politics and following their lead in voicing their views publicly. Parents and teachers are often nearby in these protests, which typically happen in neighborhoods near homes or schools, the activist claimed.

CNN cannot independently verify the authenticity of videos. The network has not been allowed into Syria to cover the unrest and draws from social media and interviews with witnesses on the ground there to inform its reporting.

There was no indication of violence Sunday, unlike what's been reported during dozens of other protests that have erupted since the mid-March arrest of teens for writing anti-government graffiti in Daraa. More than 1,100 people may have died in subsequent unrest across Syria, according to the human rights activist group Amnesty International.

Critics have accused forces loyal to al-Assad of targeting defenseless demonstrators and hindering outside help for those in need. The Syrian government has consistently blamed the protest casualties on "armed gangs."

Al-Assad on Monday afternoon will deliver his third speech in recent months about the situation in Syria, according to the official SANA news agency.

International pressure against the Damascus government has steadily grown, with calls from political leaders in the United States, Europe and elsewhere criticizing the perceived government clampdown on demonstrators.

Beatrice Megevand-Roggo, the Red Cross' director for the Near East and Middle East, said in an interview posted last month on the group's website that a lack of information and access has greatly hindered humanitarian assistance to Syria.

The head of her group, International Committee of the Red Cross President Jakob Kellenberger, will arrive in the Syrian capital on Sunday night, the organization announced via Twitter.

He plans to "discuss the humanitarian situation" and the role of the Red Cross with Syrian authorities, the nonprofit group said.

Kellenberger's visit comes two days after another high-profile activist -- actress and U.N. goodwill ambassador Angelina Jolie -- met with Syrian refugees in Turkey and drew attention to the anguish faced by families affected by the violence and reported government crackdown.

The Turkish government said Saturday more than 10,100 Syrians have crossed the border. About 3,000 more were huddled on the Syrian border near Badama, eyewitness Jameel Saib told CNN Saturday.

The refugees that Jolie visited are living in four camps managed by Turkey and the Turkish Red Crescent, reports the U.N.'s refugee agency.

"The people in this camp have fled in fear for their lives, and many told me they were distraught about the safety of loved ones still in Syria," Jolie said, according to the U.N. group.