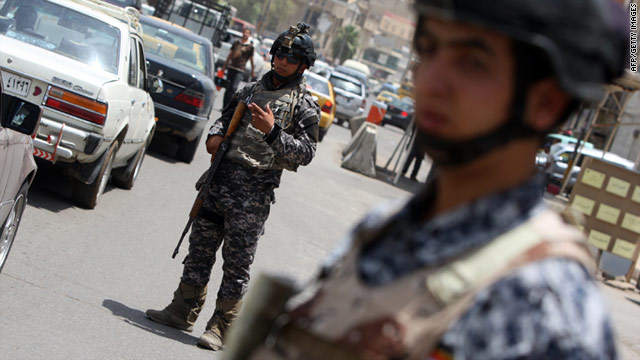 In Baquba, the militants were shooting randomly from the roof of the Diyala provincial council building at Iraqi security forces who surrounded the structure, said the officials, who did not want to be named because they are not authorized to release information to media.

The assault began with a suicide blast at the checkpoint to the compound, followed by a car bomb a few feet away, the officials said.

U.S. troops, who were on routine patrol in the area, assisted with an initial search of the building at the request of Iraqi police and later assisted with security, said spokeswoman Maj. Angela Funaro. U.S. helicopters scanned the area and provided information to the Iraqis.

Funaro said a number of U.S. tactical vehicles were also in the area but they were part of the routine convoy and were not called in as a response force.

All terrorist sleeper cells must be eliminated and the security plan in the province must be reviewed again
--Hasan al-Saneid, Iraq security committee chairman
RELATED TOPICS

The 12 fatalities included four attackers; at least 28 others were wounded in the incident, officials said.

Baquba, in ethically mixed Diyala province, is about 60 kilometers (37 miles) north of Baghdad.

"It's a tragic incident," said Hasan al-Saneid, who chairs a security committee in parliament, speaking with Iraqiya state television.

"All terrorist sleeper cells must be eliminated and the security plan in the province must be reviewed again," he said, adding that Tuesday's attack "bears the hallmark of al Qaeda" but cautioned that no conclusions be drawn until an investigation is completed.

Diyala was a stronghold of al Qaeda during the peak of Iraq's sectarian violence between 2005 and 2007.

In March, armed militants took over a government building in Tikrit in northern Iraq and held hostages. At least 56 people died and 98 others were wounded in that attack, which also ended after Iraqi forces launched a raid to take back the building.

Overall violence in Iraq has plunged over the past three years, and the insurgency there has received devastating blows. But the assaults Tuesday and in March are evidence of the instability that still plagues the nation.

The latest wave of violence raises concerns over the capabilities of the Iraqi security forces as U.S troops prepare to leave the country by the end of 2011 under the terms of a bilateral security agreement.

A new Iraqi government was formed in December but key positions that oversee security forces remain vacant amid political wrangling.