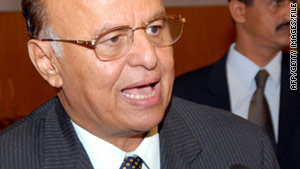 The meeting between Vice President Abdu Rabo Mansour Hadi and the opposition was the first of its kind since Hadi became acting president. Saleh and other senior officials were injured June 3 in an attack on the mosque at the presidential palace and are being treated in Saudi Arabia.

Yemen has been consumed by unrest for months as protesters have demanded an end to Saleh's rule. In recent weeks, government troops have battled both anti-government tribal forces and Islamic militants, including al Qaeda in the Arabian Peninsula.

A six-nation Gulf Arab alliance, the Gulf Cooperation Council, has tried to broker a government-opposition agreement that would lead to Saleh's departure, but that effort so far has been unsuccessful.

Mohammed Qahtan, spokesman for the Joint Meeting Parties, Yemen's largest opposition bloc, said Monday that the meeting between Hadi and the opposition were fruitful. A number of meetings are needed to ensure Saleh's power transfer, he said, and those will take place over the next couple of weeks.

Hadi was cooperative, opposition officials said, and was willing to reach an agreement. Hasan Zaid with the opposition Haq Party, who was among those meeting with Hadi, said that "when the opposition discussed the GCC proposal, the VP seemed insistent that it is the only solution that can transfer power in Yemen peacefully and safely."

Both sides agreed to meet again to take more steps toward ending Saleh's rule and beginning a transition period, he said.

"The VP said it is not his duty to sign the GCC proposal, and since Saleh has already agreed to sign it, there is no reason for him to sign it," Zaid said.

Government officials previously have insisted that while talks can take place, no deal would be finalized until Saleh returns to Yemen.

Tareq Shami, spokesman for the ruling General People Congress party, was not at the meeting but said, "Everyone wants to end the crisis in Yemen and the ruling party is being very cooperative." He said Hadi insisted both sides end the media war and open channels for a political agreement.

However, the meeting angered some. While it was taking place Monday, the organizing committee for the youth revolution condemned the talks and called on the United States and Saudi Arabia to stand with protesters and end calls to give Saleh immunity from any crimes he has allegedly committed.

Anti-government protesters in Sanaa were also opposed to the meeting.

"The opposition are destroying the revolution," said Riyadh Saleh, a pro-democracy leader in Sanaa. "We informed them that the VP meeting is a strategy by the ruling party to kill the revolution and they insisted on going."

The state-run Yemeni news agency SABA quoted Mohammed Sayani, head of the medical team that accompanied Saleh to Saudi Arabia, as saying, "The president is doing well and his health is in continuous improvement."

In a statement to SABA, Sayani said Saleh is grateful for the care he has received in Saudi Arabia, and that the nation is "standing by the people of Yemen in light of the current crisis."