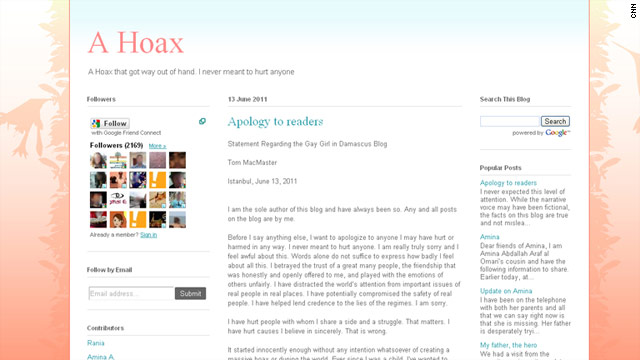 In a Sunday post titled "Apology to readers," the author, who identifies himself as Tom MacMaster, says he is the sole person responsible for material on the site.
STORY HIGHLIGHTS

(CNN) -- The State Department says it was "skeptical from the very beginning" about whether the blog by a supposed young gay Syrian-American woman living through repression in Damascus was true.

The American man who pretended to blog as a gay Syrian-American woman, sparking an international incident, said Monday he regrets the damage he caused -- and has people to apologize to.

"We began suspecting early on that this was not a real person," State Department spokesman Mark Toner said at his briefing on Monday.

In a Skype interview with the British paper The Guardian, Tom MacMaster said he had created the fake online identity "because it's hard" to write from that perspective, and he considered it "a challenge."

The Syrian government on Monday cited the news to argue that reports about its actions have been false.

"The State Department early on could not verify key details of the blogger's identity, including confirming the woman's citizenship, checking it out in the U.S. data bases," said Toner.

I do not believe that I have harmed anyone -- I feel that I have created an important voice for issues that I feel strongly about
--Tom MacMaster, blogger

"I think it speaks to the appalling civil rights situation in Syria," said Toner. "So many people heard about the story, took it to be credible, and called for action in support of her," he added.

In a post on the blog Sunday, titled "Apology to readers," MacMaster, an American who has been studying at Edinburgh University in Scotland, said he is the sole person responsible for material on the site. He signed off from Istanbul, Turkey, where he is on vacation.

The blog on Monday bore the title "A Hoax," with the subtitle: "A Hoax that got way out of hand. I never meant to hurt anyone".

In the Guardian interview, MacMaster said his "vanity" inspires him to write.

"I regret that a lot of people feel that I led them on," he said.

One of those people is a woman in Canada who, for six months, thought she was in a romantic relationship with Amina. The woman, who on Monday declined to speak with CNN, has said she had only written contact with the blogger.

"I feel really guilty about that," MacMaster said in the Skype interview. He said he "got caught up in the moment and it seemed fun."

He said he planned to apologize directly to the woman, as well as to a woman in London whose photo he took from the Internet to use as the photo of Amina. He has never met or had any contact with the woman, he said.

Until Sunday, all posts on the blog, which began appearing in February, were attributed either to "Amina Abdallah," described as a Syrian-American woman, or her purported cousin, "Rania Ismail."

The face of "Amina Abdallah" at the center of this controversy is actually a picture a Croatian woman, who lives in London.

The photo of Jelena Lucic was used for the blog without her permission.

"My picture has been used in press and media for the last week and it puts me in serious danger," Lucic said in a radio interview with the BBC on Monday.

"This is a breach of my privacy it raises so many questions. He completely ruined the genuine cause," said Lucic.

Amina's story was picked up by international news groups, including CNN.

The claims made on the blog could not be confirmed when CNN reported on Abdallah's story last week. Calls to officials in Damascus and at Syria's Embassy in London went unanswered and attempts to contact what was believed to be the blogger's family were unsuccessful.

MacMaster said another reason he chose a fictional woman's voice was that in order to discuss some of the issues he wanted to bring up, there would "be some deference from obnoxious men" who might reject similar comments being blogged by an American man. He said he hoped people would be "more polite to a girl."

He expected only a few readers, he said, but the blog's readership grew "massively beyond any expectation."

MacMaster did not respond to requests for comment from CNN.

He told The Guardian that he has not blogged under any other fake identities. "All my online playing has come to an end," he said.

The blog "A Gay Girl in Damascus" drew worldwide attention, particularly when it posted last week that the blogger, "Amina Abdallah," had been abducted.

MacMaster said he was looking for a way to "shut down the blog for a while," but ultimately decided that having her abducted was "not the way to do it."

CNN's Jill Dougherty and Tom Dunlavey contributed to this report.