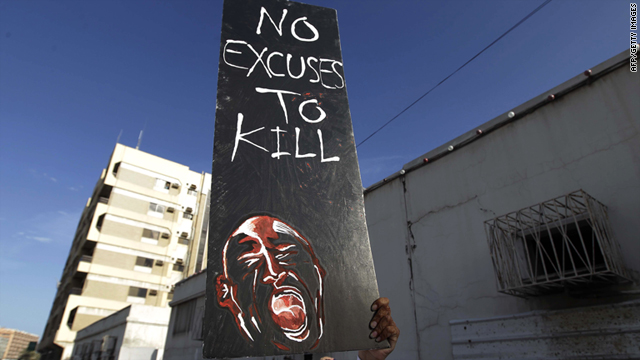 A shot from February shows doctors and nurses holding a banner while marching from the Salmaniya Medical Complex, now at the center of court proceedings in Bahrain.
STORY HIGHLIGHTS

Manama, Bahrain (CNN) -- Dozens of doctors and nurses went on trial Monday in Bahrain, accused of taking control of a hospital during anti-government protests, storing weapons and keeping people prisoner.

The doctors, their lawyers and international human rights activists say the defendants were tortured to extract confessions against a background of demonstrations in the kingdom.

One of the doctors tried to tell the judge that his confession had been extracted under torture, but the judge told him to stop and that he would be able to give evidence later in the trial.

About half the courtroom was packed with family members. Human rights observers were in the court.

Doctors and nurses on trial in Bahrain

Defense lawyers asked for civilian doctors to examine their clients, who have only been seen by military medical staff to date.

The judge agreed, and adjourned until next week after a brief hearing.

The judge denied a request from some defense lawyers that the doctors be released while the trial is ongoing.

Many of the defendants -- 24 doctors and 23 nurses and paramedics -- worked at Salmaniya Medical Complex, which the government says served as a coordination point for protests against the government earlier this year.

Prosecutors alleged Monday that automatic weapons and ammunition were discovered in the hospital, that the defendants "hijacked" the hospital building and controlled it, that they protested and used violence in a government building (the hospital), and that they kidnapped the people in the hospital and kept them prisoner inside.

Most Bahrains are Shiite, but the ruling elite are Sunni.

"We expect doctors to observe their oath and treat all people, regardless of sect, equally," al-Khalifa said in comments to CNN the day before the hearing.

Activists and human rights groups allege that the medical workers are being prosecuted for treating protesters.

Protests swept the strategically important island kingdom this year as populations across the Arab world rose up against their rulers. The small, predominantly Shiite country, governed by a Sunni royal family, is home to the U.S. Navy's Fifth Fleet.

During the protests, security forces stormed the Salmaniya Complex, the main hospital in the capital Manama, and beat doctors and demonstrators, according to witnesses.

The hospital "was used as a coordination center by protesters and had been overrun by political and sectarian activity, severely interrupting services and endangering lives," said Houda Noono, Bahrain's ambassador to the United States.

"During this period, patients were refused treatment on the basis of their sect or ethnicity, and emergency calls were neglected," she said. "The hospital grounds were barricaded and Salmaniya was very clearly no longer a neutral, medical establishment. As a result, the action to secure the hospital was both unavoidable and necessary."

Human rights groups have accused the government of widespread attacks on doctors and other medical workers.

"We documented a systematic attack on medical staff in Bahrain including the beatings, torture and disappearances of more than 30 physicians," said Richard Sollom, deputy director of Physicians for Human Rights.

Physicians for Human Rights, a group that shared the 1997 Nobel Peace Prize for its efforts to ban landmines, says it sent investigators to the Persian Gulf kingdom and interviewed 45 patients, doctors, nurses and witnesses.

The report details attacks on "physicians, medical staff, patients and unarmed civilians with the use of bird shot, physical beatings, rubber bullets, tear gas and unidentified chemical agents," the group said in an April report.

Its report echoes those released earlier by Human Rights Watch and Doctors Without Borders.

Bahraini officials have denied the allegations.