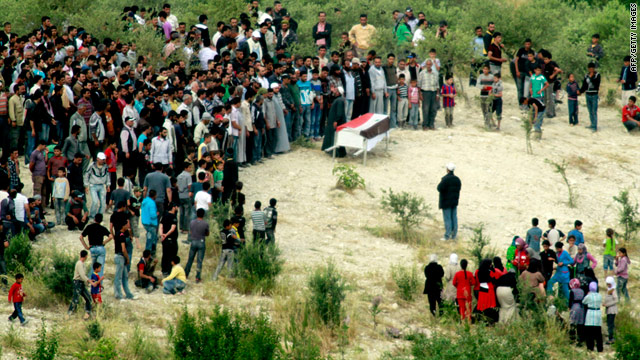 Syrian mourners gather at a funeral service for an anti-regime protester on the border with Turkey on Saturday.
STORY HIGHLIGHTS

Jisr al-Shugur was under heavy shelling as hundreds of military vehicles entered the city and helicopters hovered in the sky, said the Local Coordination Committees of Syria, a network of human rights activists.

One Syrian soldier was killed and four other soldiers injured in the fighting, Syrian state television reported Sunday. The state-run Syrian Arab News Agency (SANA) said two gunmen were killed, and "many others" were arrested.

State television said Sunday that military units had entered Jisr al-Shugur to "cleanse the national hospital from the elements of the armed gangs after disabling the explosives and the various TNT devices that these gangs planted on the bridges and roads."

Accounts from the Syrian government have sharply contrasted with reports from residents, who say there are no "armed gangs" in Jisr al-Shugur.

State TV also said Sunday that authorities in the town had found a mass grave containing decapitated and mutilated bodies of members of security forces killed by "armed gangs."

President Bashar al-Assad's regime has consistently blamed armed gangs for the bloodshed, but activists and protesters say security forces have caused the violence.

"The Syrian authorities have an obligation to protect their people and respect their rights. The use of military force against civilians is unacceptable," the U.N. statement said.

Many have fled "the Syrian government's military offensive" in Jisr al-Shugur, British Foreign Secretary William Hague said in a statement condemning the violence Sunday. In an earlier interview, he called on the U.N. Security Council to take a stand.

"I do believe it is time for the Security Council to make a clear statement of the kind that we're advocating, calling on the Syrian government to respond to legitimate grievances, to release prisoners of conscience, to open up access to the internet and to cooperate with the U.N. high commissioner on human rights," he told Sky News Sunday.

He said he had been trying to garner support from countries represented on the council, but noted that the prospects of passing a resolution were "on a knife edge" -- particularly since U.N. Security Council member Lebanon is a close ally of Syria.

"Close interconnections between the Lebanese government and the Syrian government have made it impossible for Lebanon to take a clear position on this," he told Sky News.

CNN has been unable to independently confirm accounts of the unrest in Syria, as it has not been granted access to the country by the Syrian government.

On Friday Syrian troops came to the entrances of Jisr al-Shugur in an operation "to restore security and tranquility to the area which was being terrorized by armed terrorist groups," SANA reported.

The Syrian government announced it would punish Jisr al-Shugur after it accused "armed groups" of killing at least 120 security forces there several days ago.

SANA on Sunday also reported that one police officer was killed, and another was injured in clashes with "an armed terrorist group" in Idlib province Friday. The government news agency said Syria's army arrested "terrorist groups and snipers" there Saturday.

Meanwhile, the Lebanese Shiite militant group Hezbollah denied media reports that it had been involved in clashes in Syria, saying such accounts were lies, rumors and "sectarian incitement."

Syrian refugees who fled to Turkey have said some Syrian soldiers rebelled after being ordered to fire on unarmed protesters and instead started fighting among themselves.

The number of Syrians escaping to Turkey has escalated to 4,300, a Turkish official news agency reported Saturday.

A fourth refugee camp was set up Sunday in Hamza Cisligi, about 100 meters (109 yards) from the Syrian border in Turkey, to take in Syrians who have fled the regime's crackdown.

Halit Cevik, the Turkish Foreign Ministry's deputy-undersecretary for the Middle East, told the Anadolu news agency Saturday that Turkey has made preparations for more refugees.

"Turkey had welcomed great many numbers of guests in the past in their most dire times of need. We can do that again," Cevik said, according to Anadolu.

The Syrian Observatory for Human Rights said at least 25 people were killed Friday in various locations, including 11 in town of Maaret al-Nouman.