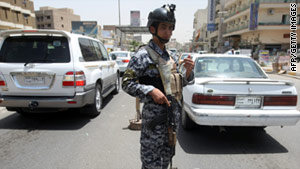 An Iraqi police officer works at a checkpoint in Baghdad, a day after five U.S. soldiers were killed.
STORY HIGHLIGHTS
RELATED TOPICS

(CNN) -- An attack that killed five American soldiers in Iraq is likely the work of a Shiite militia trying to take credit for driving forces out of the country, the U.S. military said.

The attack was followed by a purported claim of responsibility for the killings by one such group.

The June 6 killings were the single largest loss of life among U.S. troops in Iraq since 2009.

They come as Iraq debates whether to request American soldiers to stay beyond a January 1, 2012, deadline that requires 46,000 forces out of the country.

"We have been anticipating that we would see an increase in attacks as U.S. forces prepare to transition our mission," Army Maj. Gen. Jeffrey Buchanan, spokesman for U.S. Forces-Iraq, told CNN late Saturday in an e-mail.

"Our assessment is that groups like the Iranian-backed militias: Kataib Hezbollah, Asaib al-Haq, and the Promise Day Brigade, are attempting to claim credit for driving US forces out of Iraq to garner prestige by conducting these attacks."

In a statement posted on one of its websites, Kataib Hezbollah claimed responsibility for the attack at Camp Loyalty, on the outskirts of Baghdad that killed five soldiers and wounded at least five others.

CNN cannot independently verify the legitimacy of the claim.

The U.S. military maintains that Kataib Hezbollah and the other Shiite militias are backed by Iran, a charge it has long denied.

Department of Defense officials released Thursday the names of the five soldiers killed in the June 6 attack.

The soldiers were assigned to the 1st Battalion, 7th Field Artillery Regiment, 2nd Heavy Brigade Combat Team, and 1st Infantry Division. They were based in Fort Riley, Kansas.

U.S. troops have increasingly been targeted by roadside bombings and mortar attacks, largely in Baghdad and southern Iraq -- a Shiite stronghold.

While al Qaeda in Iraq -- predominantly Iraqi Sunni insurgents -- continues to launch strikes, the U.S. military has said that militia attacks against American troops are designed to flex their strength and take credit for an anticipated U.S. withdrawal at the end of the year.

In the e-mail, Buchanan said the U.S. military would continue to take steps to protect its troops in Iraq.

"We will not tire in our efforts to find the perpetrators and bring them to justice," he said.

Under a U.S.-Iraqi security pact, which set a timetable to withdraw American forces, U.S. troops must be out of Iraq by Jan. 1, 2012.

Prime Minister Nuri al-Maliki is consulting with members of his government about whether to ask American troops to stay beyond the deadline, though the U.S. military says there has been no official request by al-Maliki to President Barack Obama about any such extension.

Many in Iraq are vehemently opposed to U.S. troops staying beyond the deadline.

Radical Shiite cleric Muqtada al-Sadr has threatened to end a 2007 cease-fire and "escalate armed resistance" of his militia if U.S. troops remain beyond the deadline.