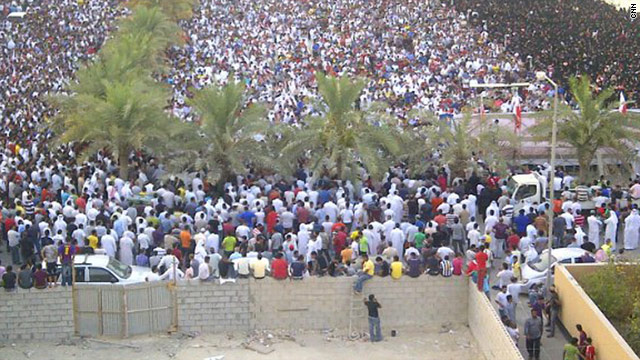 Matar Matar and Jawad Fairooz were charged with "spreading malicious lies in an attempt to overthrow the government," an official in the Information Affairs Authority told CNN.

Both men pleaded not guilty and will remain in custody until their next hearing, said the official, Sheikh Abdul-Aziz bin Mubarak. He said their lawyers have been given more time to prepare their cases.

Both men were seized May 2, family members said.

The trials come after the small, strategically important Gulf kingdom was swept by protests earlier this year as part of the Arab Spring demonstrations.

The legal proceedings began Sunday without prior notice, according to a Matar family member who asked not to be named for security reasons.

Fairooz's lawyer only found out the charges once he appeared in court Sunday, the defendant's brother Jamsheer Fairooz said.

Jawad Fairooz said he was being treated well and looked to be in physically good condition but had "aged 10 years -- his beard and hair have both gone white," his brother said.

Matar, 35, was taken from his car by armed men in masks on May 2, according to a relative. He represented the biggest constituency in Bahrain, with approximately 16,000 people.

Elected to the lower house of Parliament in October 2010, Matar resigned along with other Wefaq lawmakers earlier this year to protest the government crackdown on demonstrators. Wefaq is a Shiite party, the predominant religion in the kingdom whose rulers are Sunni.

Bahraini human rights activist Nabeel Rajab said the trials are "not (of) an international standard," saying the defendants had "not only (had) no access to lawyer but even their families (were) not informed they were being taken court."

Meanwhile, poet Ayat al-Qormozi, 20, was found guilty of assembling at Pearl Roundabout, the epicenter of anti-government demonstrations in the kingdom earlier this year. Additional charges included speaking out against Bahrain and the king.

The Bahrain Youth Society for Human Rights said she read a poem criticizing government policy at the Roundabout.

Mubarak, the government official, said Bahrain had freedom of speech, but that there were limits.

"Freedom of speech in this country has its boundaries and cannot touch on the leadership, and cannot call for the overthrow of the government," he said.

Her poem, he said, "caused incitement and hatred to his majesty the king and to the prime minister" with lines such as "we are people who kill humiliation" and "assassinate misery."

Amnesty International called the charges "unfair" in a statement after the sentence.

"By locking up a female poet merely for expressing her views in public, Bahrain's authorities are demonstrating how free speech and assembly are brutally denied to ordinary Bahrainis," said Malcolm Smart, Amnesty International's Director for the Middle East and North Africa.

Al-Qormozi had been detained since March 30, after her father led security forces to her in the face of threats to his other children's lives, a family member said.

She alleges that she received electrical shocks to her face and was beaten with a hose while in detention, according to the relative, who asked not to be named for security reasons.

Her mother and father were the only family members allowed in court, the relative said, adding that a lawyer was present with her.

Bahraini security forces went to her house around midnight a few days before she was detained, but she was not home, the relative said.

The security forces broke things in the house and told the family they would return the following day for her. They returned the next night but she was still in hiding, the relative said.

Bahrain's government declined to comment on the specifics of al-Qormozi's case, but said: "All detention centers conform to the conditions set down under international human rights regulations and the detainees are treated as innocent until proven guilty."

Thousands of Bahrainis protested their government Saturday in a rally organized by the Wefaq party.

Unafraid, pro-reform demonstrators hit the streets with their faces uncovered, said a journalist at the scene who was not identified for security reasons.

Rajab said the march went off peacefully, with no security forces present.

It was the second such protest since the government last week lifted emergency laws that were imposed in mid-March, allowing a crackdown on political leaders and journalists.

Bahrain's ruling royal family -- Sunnis in a majority-Shiite nation -- accuses protesters of being motivated by sectarian differences and supported by Iran.

Ali Salman, the secretary general of al Wefaq, told the large crowds that he supports the government's offer of dialogue but said he could not endorse it fully until the conditions for such talks were clear.

Crown Prince Salman, who met with U.S. officials in Washington Wednesday, thanked President Barack Obama for his backing of a national dialogue in Bahrain.

Bahrain is home to the U.S. Navy's Fifth Fleet, and the United States has been concerned about the instability in the Persian Gulf island state.