Another day of clashes, angry protests in Yemen 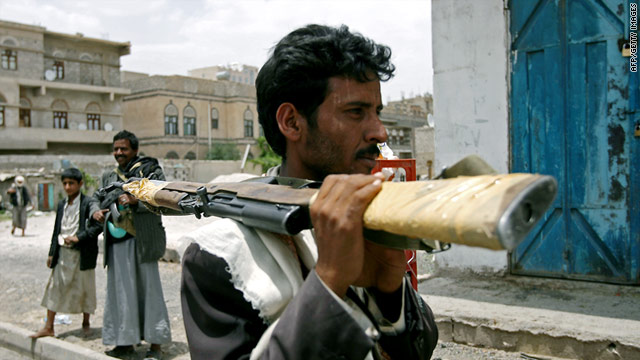 Demonstrators took to the streets and demanded the creation of an interim body that would guide and shape the country's political transition.

Clashes between security forces and suspected militants have erupted in Lawdar and Zinjibar, towns in Abyan -- a militant stronghold with a presence of Yemen's al Qaeda wing, SABA reported, citing a military official.

Eighteen al Qaeda members and nine soldiers were killed in Zinjibar and three militants and one soldier were killed in Lowdar, the report said. Dozens of people were injured.

"The heroes of the armed and security forces in Abyan province caused the terrorist elements of al Qaeda heavy losses in lives and material after fierce confrontations with those elements that began in the early hours of the morning and lasted several hours and ended with the killing of a number of them and injuring many others," SABA reported.

A Yemeni security official, who has asked not to be named because he is not authorized to speak to the media, told CNN that Yemen's government conducted air raids on positions in Lawdar believed to be held by al Qaeda in the Arabian Peninsula.

Government forces have been fighting Islamic militants who seized the town of Zinjibar. Heavy gunfire and explosions were heard through the city, and planes were seen flying overhead and conducting airstrikes, witnesses and residents said.

The military official cited by SABA said Yemeni military forces targeted a warehouse used by militants to store weapons and cars used by the fighters. The official said troops are working to track down al Qaeda fighters and "cleanse the pockets and hiding places where terrorists are present."

Yemen has been consumed with unrest for months as protesters demand an end to the rule of President Ali Abdullah Saleh.

In recent weeks, government troops have battled both anti-government tribal forces and Islamic militants, including al Qaeda in the Arabian Peninsula.

A six-nation Gulf Arab alliance, the Gulf Cooperation Council, has tried to broker a government-opposition agreement that would lead to Saleh's departure, but that effort has so far been unsuccessful.

The demonstrations continued on Saturday as thousands of anti-government protesters took to the streets in Sanaa, Taiz, Ibb and Hodeidah, eyewitnesses said.

Witnesses said the demonstrators on Saturday called for the vice president to create an interim transitional council to help fashion a political transition.

They accused the United States and the GCC of supporting the Saleh regime, and demanded support of the youth revolution.

Anti-government forces also criticized opposition political parties and politicians for supporting the GCC deal, which would lead to Saleh's departure but give him immunity.

Khaled Al-Anesi, a prominent rights activist in Sanaa, said the United States and the international community should support the Yemen revolution "as it did in Tunisia and Egypt if it wants Yemen to continue to be its ally in the future."

The chaos there intensified when Saleh and other senior officials were injured in a June 3 attack on the mosque at the presidential palace.

Saleh and other senior officials injured in the attack went to Saudi Arabia for treatment. A government spokesman said Thursday Saleh was in good health and would be returning to Yemen "within days."