At least 15 killed in Syrian protests 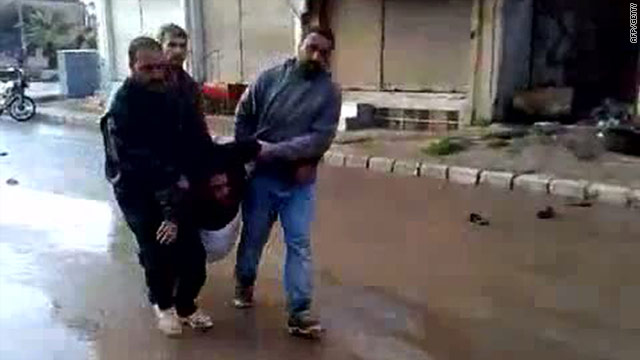 (CNN) -- At least 15 people were killed Friday across Syria in widespread anti-government demonstrations, according to reports.

Six people were killed in Latakia, five in Idlib and Maaret al-Nouman, two in the Damascus suburb of Qaboun, and two in Basra al-Harir in Daraa province, the Syrian Observatory for Human Rights said.

In the northern town of Maaret al-Nouman, Syrian security forces and helicopters sprayed automatic weapons fire into a crowd of thousands of protesters demonstrating Friday after prayers, killing at least four men, an activist said.

Another group reported a nationwide death toll of 22.

The Syrian military launched an operation to retake the rebellious border town of Jisr Al-Shugur, located near Turkey, but it was not known how many casualties may have occurred there.

Anti-government marchers have staged nationwide protests on Fridays after Muslim prayers for weeks and have given each one of those days a theme.

Friday's expression of discontent was dubbed "the Friday of the kinship," implying that all Syrians are members of one family. A Facebook page promoting the activism reported demonstrations in Damascus, Qamishli, Tabqa, Deir Ezzor, Abu Kamal, Al-Mayadin, Basira, Qurie, Ras El-Ein and other cities.

UNESCO Director-General Irina Bokova on Friday described as "alarming" the reports she was receiving from Syria.

"The rights of citizens must be respected, as must the rights and security of journalists. This includes the right to freedom of expression, the need to access information and the ability to communicate. The decision to shut down Internet access and cell phone networks, to block broadcasters and prevent journalists from doing their job is not acceptable."

Citing a promised amnesty and a call for national dialogue by Syrian government officials, Bokova urged "authorities to immediately restore Internet and cell phone services for citizens, to lift restrictions on the media and to prevent acts of aggression against journalists, so that they can report freely on events as is their duty."

A spokesman with the Local Coordination Committees in Syria said there were two demonstrations after noon prayers in Daraa, where 1,000 people gathered in the Al Kousour neighborhood and 3,000 in Tarik Al Sad. Daraa is where anti-government protests began nearly three months ago.

Crowds were chanting for the fall of the regime and in support of the people of Jisr Al-Shugur and Hama, where there have been military assaults on protesters. Security forces fired into the air to disperse the protesters, and casualties were reported.

The activist also received reports of two dead in the village of Basra al-Harir, more than 20 miles northeast of Daraa when the security forces randomly opened fire at protesters.

The LCC cited a death toll of 22 protesters countrywide.

Syrian state TV reported an assault on security forces in Qaboun resulting in injuries. It said gatherings in the cities of Ras El-Ein and Amouda were dispersing.

State TV said "armed gangs" in Maaret al-Nouman and Idlib were shooting at security force headquarters and were trying "to repeat the same scenario of Jisr Al-Shugur by setting various public and security forces and police institutions on fire."

The activist, who has provided CNN with reliable information in the past, said the crowd numbered in the tens of thousands when security forces on the streets and an attack helicopter aloft opened fire.

As for nearby Jisr Al-Shugur, Syrian refugees and opposition activists who fled the town fearing a government attack said they heard tanks firing cannons as they advanced through villages approaching the town.

A spokesperson for U.N. Secretary-General Ban Ki-moon said he was "deeply concerned" about the continuing violence in Jisr Al-Shugur.

"The Syrian authorities have an obligation to protect their people and respect their rights," the spokesperson said in a statement. "The use of military force against civilians is unacceptable."

In Washington, the White House press secretary said the United States condemns the Syrian government's "outrageous use of violence across Syria today and particularly in the northwestern region."

He accused Damascus of leading the country "on a dangerous path" and added, "We stand by the Syrian people who have shown their courage in demanding dignity and the transition to democracy that they deserve."

The military advance spread panic throughout the civilian population. Residents said they had evacuated women and children from Jisr Al-Shugur in recent days. More than 3,800 Syrian refugees have fled to Turkey and humanitarian workers feared many more were en route.

The Syrian government announced it would punish Jisr Al-Shugur after it said "armed groups" massacred at least 120 security forces there several days ago.

Refugees have disputed that claim. They say some of the soldiers rebelled after being ordered to fire on unarmed protesters and instead started fighting among themselves.

CNN's Nada Husseini and Richard Roth contributed to this report