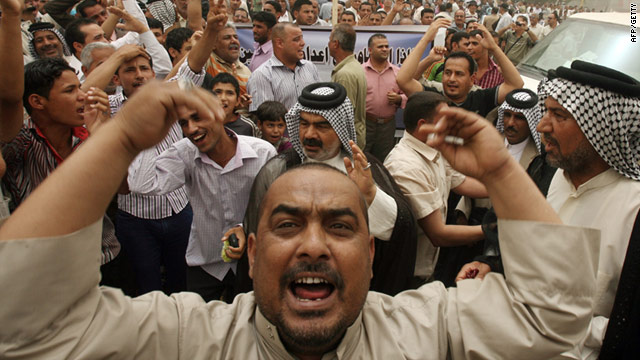 Hundreds of supporters of Prime Minister Nuri al-Maliki, including tribal leaders and government officials, carried posters and banners. They want to see the authors of some of the most violent sectarian violence executed.

About 200 anti-government protesters rallied against corruption, unemployment, lack of basic services and freedom of expression.

The pro-government demonstration followed broadcasts on state-run television Iraqiya of testimonies of those accused of committing sectarian crimes against Iraqis in 2006 and 2007.

Among the crimes featured on these broadcasts was the so-called al-Dujail wedding massacre.

Firas Hassan Fleih al-Jabouri is accused of leading a terrorist group that killed dozens during a wedding party. Authorities say they raped the bride and then the killed her along with the groom.

Gen. Qassim Atta, the spokesman of Baghdad operation command said in a press conference early this week that al-Jabouri was a human rights activist, and had an identification card stating as much. If he was involved in the attack, it raises the possibility that he was posing as an activist to evade detention.

Al-Jabouri and 24 others were arrested last month in connection with the massacre.

He was among those that protesters were calling to be executed, even though his trial has not been held yet.

Pro-Maliki demonstrators shouted at the anti-government protesters, calling them " Baathists." They responded with shouts of "baseless" and "untrue."

Two human rights activists who were among the demonstrators told CNN that at least seven anti-government protesters were beaten with sticks by some pro-Maliki protesters.

CNN footage showed a protester being beaten by some people and the two groups shouting at each other.

Eventually, anti-government demonstrators were chased out by civilians carrying sticks.

Since early February, tens of thousands of protesters have participated in a series of demonstrations across the country, apparently inspired by popular uprisings in Egypt and Tunisia.

In that period, at least 20 Iraqis have been killed and hundreds have been wounded in protests across the country.