Tribal leader agrees to call to end fighting in Yemen 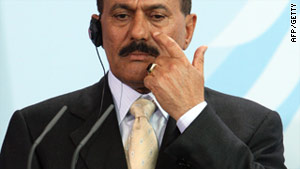 Supporters of Hashed tribal leader Sadeq Al-Ahmar are suspected of being behind an attack on a mosque within the presidential palace Friday that left Saleh wounded. Vice President Abed Rabbo Mansour Hadi is in charge during Saleh's absence, and Al-Ahmar agreed to a cease-fire with Hadi late Sunday, his spokesman, Abdulqawi Al-Qaisi, told CNN.

"In response to the vice president's call to end confrontation in Sanaa, Sadeq Al-Ahmar has ordered his fighters to evacuate the government buildings they took over since the beginning of the clashes two weeks ago and to halt all fighting in the capital," Al-Qaisi said.

The deal follows two weeks of clashes between government and tribal forces in Yemen, where thousands of protesters have been pressuring Saleh to give up power since January. The fighting erupted when Saleh balked at a deal with the opposition that would have eased him out of office in 30 days, and opposition Yemen's largest opposition bloc vowed to prevent him from returning.

"The Yemeni people will do all in their power to not allow Saleh to re-enter the country," Joint Meeting Parties spokesman Mohammed Qahtan said.

Saleh's condition was unclear Sunday, with Western diplomatic sources saying he was undergoing neurosurgery while a spokesman for his party describing the procedure as "simple check-ups." A senior U.S. official said Saleh had shrapnel wounds and severe burns to his face and chest, adding that it was not clear how serious the injuries were. The official declined to be named due to the sensitivity of the situation.

Still, ruling party spokesman Tareq Shami said Sunday that Saleh's health is "very good, and this is an ordinary visit."

"He will continue leading the country as he has been with no changes," Shami said.

Joost Hiltermann, an Washington-based analyst at the International Crisis Group, told CNN that the president's decision to seek treatment in Saudi Arabia means a shift in power is likely, but "not yet a foregone conclusion."

"The president's sons and nephews control a significant part of the security apparatus," Hiltermann said. "And they might yet put up a fight, or decide to go into negotiations over a transition of power."

Riyadh Ali, an anti-government activist in the southwestern city of Taiz, said, "Our celebration starts today." Saleh "will not have the courage to return to the country after being attacked by his own people," he said.

But in Sanaa, youth activist Ibrahim Mothana in Sanaa questioned whether the celebrations may have come too soon.

"It's hard to know what Saleh's departure means," Mothana said. "Is it temporary, or was it planned behind the scenes between the international community and the Yemeni government?"

And two Yemeni soldiers were wounded when gunmen opened fire on their checkpoint in the port city of Aden, according to a security official there who asked not to be named as he is not authorized to speak to the media. Aden has gone at least one month without seeing a similar attack, the official said.

Saleh landed in Riyadh on Saturday after a Saudi medical team examined the Yemeni leader in Sanaa, according to a statement carried by the state-run Saudi Press Agency.

"The medical team has come to the conclusion that it is appropriate to complete health care for the president in an advanced medical center," the statement said. "The president has agreed on this and has shown his desire for completing his treatment in the Kingdom of Saudi Arabia, and the president arrived in the Kingdom on Saturday evening."

A source close to the Saudi government told CNN that Saleh was immediately taken to a nearby hospital after his plane landed in Riyadh, and his medical condition is worse than originally thought, the Saudi source said.

Government officials had blamed Hashed fighters for Friday's attack, but now are investigating whether the local branch of the al Qaeda terrorist network was behind the attack.

Yemen has been a key U.S. ally in the fight against al Qaeda, and John Brennan, the top White House counterterrorism adviser, spoke to Hadi on Saturday, according to two senior U.S. officials.

"The instability and lack of security in Yemen cannot be fully addressed until the aspirations of the Yemeni people are realized," Toner said.

Yemeni security forces pounded Al-Ahmar's home on Friday in response to the attack on the presidential palace. The flurry of shelling left 10 people dead and 35 others wounded, according to Fawzi Al-Jaradi, an official with the Hashed tribal confederation.

And Islamic militants killed 10 soldiers in two ambushes in Yemen on Saturday and Sunday, a senior Interior Ministry official told CNN. Both attacks took place in the southern province of Abyan, the official said.

"The attack is the seventh in more than five days by Islamic militants against government forces," the official said. "Over 50 soldiers have been killed in the last 10 days of fighting."

The senior official did not want to be named because he is not authorized to talk to the media.