Why we should care about Yemen 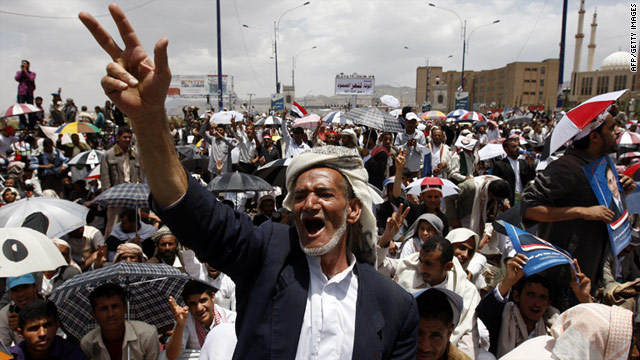 Editor's note: CNN Executive Editor Tim Lister has covered international news for 25 years as a producer and reporter for the BBC and CNN. He has lived and worked in the Middle East and has helped lead CNN's coverage of the current waves of unrest in the Arab world.

(CNN) -- At first glance, it might seem that Yemen -- like Somalia -- is a place we should best forget about. It has few proven natural resources, its hinterland is largely barren and inaccessible, and it has a long history of being virtually impossible to govern. But first impressions can be misleading, and if Yemen were to sink into a state of anarchy, the implications for the Gulf region and beyond would be profound.

When I first visited Yemen in 1987, President Ali Abdullah Saleh (yes, he had already been in power for nearly a decade) was cleverly playing one foreign suitor against another. The Chinese were building roads, the United States had a variety of aid schemes (and Hunt Oil of Texas was exploring for hydrocarbons), and the Russians were selling weapons. Yemen was an important place to be in the global chess game.

Yemen's oil potential has turned out (so far) to be less exciting than was once thought, but its strategic location still matters. To the north and west, it has a long porous border with Saudi Arabia, which is very concerned that instability in Yemen -- and the growing al Qaeda presence there -- could spill over. Saudi Arabia has begun a multibillion-dollar project to make its 1,100-mile border with Yemen more secure, including fences and barbed wire in areas most vulnerable.

Since 9/11, the Saudis have invested heavily in stamping out the threat at home from al Qaeda, and the last thing they want is contagion seeping in from next door. The same applies to Oman, Yemen's other neighbor in the south.

Saudi Arabia has also been concerned by what it sees as Iranian meddling in Yemen in support of the rebellion by the Houthis (a Shiite minority in the north). Already apprehensive about unrest among their own Shiite minority, the Saudis last year used air power to help the Saleh government subdue the Houthi rebellion. Iran has denied that it has helped the Houthis but criticized the Saudi intervention.

The city of Aden in southern Yemen has long been an important port at the crossroads of some of the world's busiest sea lanes. It was built up as a coal station for British merchant ships traveling to India, and its large natural harbor should make it a regional hub. But a lack of investment and political instability has hampered its development.

The Gulf of Aden, off Yemen's coast, sees huge tonnage in merchant shipping: Every day, 3 million barrels of oil pass through these waters. To the north is the Suez Canal and refineries at the Saudi port of Yanbu; to the south are the Indian Ocean and shipping lanes to energy-hungry Asian markets.

These are the sea lanes already prowled by Somali pirates, and the Yemeni coast guard has been part of an international operation to protect shipping. More instability in Yemen, and the possibility that pirates could begin to use its long and sparsely populated coastline, could make shipping in the region even more vulnerable.

Yemen also overlooks a maritime "choke-point," a narrow passage like the Strait of Hormuz at the tip of the Persian Gulf. At its narrowest, the Bab el Mandeb strait is just 12 miles wide, with Yemen on one side and Djibouti on the other. Little wonder Djibouti has become an important outpost for the U.S. and French military.

Somalia's chaos is just across the Gulf of Aden from Yemen, which is why thousands of Somalis have fled in recent years to seek sanctuary in Yemen, risking piracy and shipwreck in the process. They leave Bosaso on the northern Somali coast and hope to arrive somewhere along the Yemeni coast. An estimated 70,000 Somalis arrived in 2009 alone, and there are now an estimated 1 million Somalis living in Yemen, many of them almost destitute.

Left to its own devices, Yemen is unlikely to muddle through, with consequences that range far beyond the Arabian Peninsula.
--Former U.S. Ambassador Edmund Hull, writing in Foreign Policy

Yemen has very openly expressed concerns that Islamists in Somalia (in the Shabaab movement that is affiliated with al Qaeda) may be exploiting this exodus. At least currently, there is some monitoring and control of the Somalis arriving in Yemen; but many of them live in wretched refugee camps that could be recruiting grounds for Islamist movements. In addition, intelligence sources fear growing collaboration between Al Shabaab and al Qaeda in the Arabian Peninsula.

Growing instability in Yemen could lead to the nightmare scenario: a failing state and a failed state either side of important shipping lanes, and close to the world's most important oil-producing region.

Oil and gas -- and a crumbling economy

Yemen is a minor player among oil and natural gas producers, but at a time when Libya and Iraq are producing less than their potential, and supply is tightening worldwide, its contribution should not be dismissed.

Yemen is the world's 32nd biggest oil exporter and 16th biggest seller of liquefied natural gas, and there may be greater potential to unlock. But Yemeni production is currently headed south, from more than 400,000 barrels per day in 2003 to fewer than 300,000 in 2009. Unrest, a lack of foreign investment and sabotage of pipelines have all contributed to a dire outlook for Yemen's oil industry, which is essential to the government's revenues.

The unrest in Yemen has affected many basic services -- including power and water -- and brought an already feeble economy close to collapse. That matters beyond Yemen: It could prompt an exodus of desperate people and help feed an insurgency that thrives in a vacuum. Already, hundreds of people try to get into Saudi Arabia illegally every day. And if outside powers want to prevent a total collapse of the Yemeni economy, they will need deep pockets.

A homeland for al Qaeda

You only have to look at the list of detainees at Guantanamo Bay to know that Yemen has been a fruitful recruiting ground for al Qaeda. The great majority of the 800 prisoners listed in recently published detainee assessments were Yemenis.

Back in the 1990s, most of Osama bin Laden's bodyguards were recruited from Yemen. Radical imams and other recruiters in Yemen provided money and made travel arrangements for would-be jihadists. Some of the al Qaeda sympathizers arrested in Yemen (and many were not) escaped in a spectacular jail break in 2006

In recent years, Yemen has become a haven for a variety of jihadists who have gravitated to a growing al Qaeda affiliate with a flair for self-publicity and innovative bomb plots. They have included several U.S. citizens and a number of Europeans.

U.S. counterterrorism officials regard al Qaeda in the Arabian Peninsula as the most active operational franchise of the terror group, and it certainly has international ambitions. Among recent terror plots hatched in Yemen:

• The attempted bombing of a U.S. airliner, in which a young Nigerian who spent time in Yemen has been charged, and for which al Qaeda in the Arabian Peninsula has claimed responsibility;

• An assassination attempt against the Saudi intelligence chief by a Saudi national who was supposedly going to give himself up. He hid high explosives in his underwear.

• The shipping of two printers containing the almost untraceable explosive PETN on board cargo planes bound for the United States. The devices appeared designed to explode as the planes approached or arrived at their U.S. destinations. Neither exploded, but forensic investigators and counterterrorism sources have said that their assembly was sophisticated; and despite intelligence supplied by the Saudis, they were difficult to locate among the thousands of packages carried by air every day. The plot set off a massive hunt for packages that might have originated in Yemen.

Yemen was also home to one of the most charismatic of al Qaeda's new generation, the English-speaking cleric Anwar al-Awlaki, who was killed in a U.S. drone strike in September, and several other American jihadists accomplished in relating the terrorists' goals to a global audience through the Internet, using glossy online publications such as Inspire.

There are signs that the current unrest, with government forces now focused on combating Saleh's opponents, is allowing al Qaeda and other militant groups greater latitude, especially in the south. Several hundred militants took over the southern coastal city of Zinjibar in June. Should the elite Central Security Force be dragged into what is virtually a civil war, and away from its counterterrorism role, al Qaeda's breathing space in Yemen will be all the greater.

The view from Washington

U.S. aid to Yemen has fluctuated over the years, depending on how grave the terror threat is perceived to be. Recently it has been substantially increased, both in terms of military training and equipment and economic assistance. US Agency for International Development funding increased from a meager $9.3 million in 2008 to $24 million in 2009.

Today, policy-makers in Washington recognize that should Yemen descend into chaos, or should Saleh be succeeded by a regime hostile to the United States, the problems would be manifold.

A former U.S. ambassador in Sanaa, Edmund Hull, wrote in Foreign Policy: "Left to its own devices, Yemen is unlikely to muddle through, with consequences that range far beyond the Arabian Peninsula. A concerted, multilayered diplomatic effort can succeed. Even a skilled political dancer like Ali Abdullah Saleh can't defy gravity forever."

But time is now of the essence as casualties mount, divisions deepen, and a revolt verges on becoming civil war.

Comparing Libya to Yemen, former CIA Director Michael Hayden told CNN's "State of the Union" a few weeks back: "In geo-political terms, (Libya) is somewhat self-limiting. That's not the case with Yemen. We have a thriving al Qaeda affiliate in Yemen. We have more than a million Yemeni expatriates, guest workers, throughout the Gulf region. What happens in Yemen bleeds out much more quickly than what happens in Libya."

In February, the director of the National Counterterrorism Center, Michael Leiter, was more specific about the risk posed to the United States. "I actually consider al Qaeda in the Arabian Peninsula with al-Awlaki as a leader within that organization probably the most significant risk to the U.S. homeland," he said.

Like markets, policy-makers dislike uncertainty. As Hayden put it: "This is fundamentally a tribal society, so what comes after (Saleh) is very unpredictable, and it's hard for me to imagine that it's going to be good news for us, at least in the short term, in the global war on terror."

In the wake of the Christmas Day 2009 attempt to blow up a U.S. airliner as it approached Detroit, Deputy National Security Advisor John Brennan said: "What we need to do is continue to work very closely with our Yemeni partners and other international partners to make sure that we're able to drive al Qaeda down within Yemen, because they do present a serious threat there, but also abroad."

Brennan, the president's chief counterterrorism advisor, traveled to the region in June exploring ways to end Yemen's ever-deepening crisis and Saleh's rule. Just who "our Yemeni partners" will be a year, or even a month, from now is an open question.