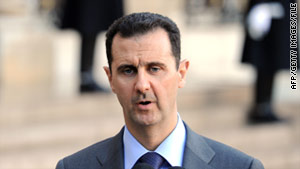 (CNN) -- Syria announced Tuesday that it is granting "amnesty" to protesters accused of committing crimes.

But a report published by the state-run news agency seemed to suggest the protesters were not actually being offered amnesty, as in a general pardon, but were having their punishments for alleged crimes decreased.

The amnesty includes "all of those who belong to various political movements including the Muslim Brotherhood," the alert on state TV said.

The announcement came after weeks of Syrian officials describing some protesters as "terrorists" trying to destabilize the country.

A report Tuesday on the website of SANA, Syria's state news agency, said that in addition to granting general amnesty, Assad's decree "also pardons half penalties for felonies if there was no personal claim."

The report says Article 1 of Assad's decree grants "general amnesty for all crimes committed before May 31, 2011, according to the following." It then lists changes in punishments. The death penalty will be replaced with a "life sentence of hard labor or long imprisonment sentence according to the crime," a life sentence of hard work will be replaced with "20 years imprisonment with hard labor," and so on.

A call to the Syrian Embassy in Washington for clarification was not immediately returned.

The Syrian uprising, part of the so-called Arab Spring in which protesters throughout much of the Middle East and North Africa have taken to the streets calling for reforms, has been met with a fierce crackdown by the government.

Roughly 830 people have been killed in the protests, according to the Syrian Human Rights Information Link. That number does not include security personnel whom the Syrian government says died in attacks by "armed groups."

The United States has imposed new sanctions on al-Assad and other senior Syrian officials over human rights abuses, freezing any assets held in the country .

CNN's Josh Levs and Arwa Damon contributed to this report