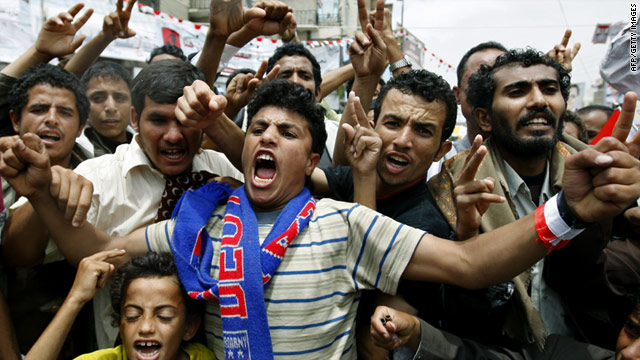 (CNN) -- Sporadic gunfire erupted in the Yemeni capital early Saturday evening, just moments after a mediation deadline expired without a peace agreement between the country's long-time president Ali Abdullah Saleh and tribal factions, according to witnesses and a senior tribal leader involved in mediation efforts who was not authorized to speak to the media.

The deadline had been set for 6 p.m. (11a.m. EST) and was meant to stem a rash of recent violence between the country's tribal groups and government security forces, both now poised in a standoff in-and-around the Yemeni capital of Sanaa.

Witnesses described "light clashes" between the two sides, roughly 30 minutes after the deadline had expired.

Some residents had heeded calls to evacuate parts of their capital city Saturday in expectation of further clashes between the two groups, but most remained firmly entrenched in their homes, according to witnesses.

The order was carried out by members of the country's Republican Guard and law enforcement, who warned residents in city neighbourhoods of more confrontations after tensions flared Friday between Nehm tribesmen and soldiers of the Republican Guard.

The tribesmen said the soldiers attacked a village, but tribal fighters, battling back, managed to take over military compounds.

Elsewhere, three French humanitarian workers were kidnapped Saturday in the southern city of Say'oon, according to a senior Interior Ministry official in that city.

Meanwhile, armed tribesmen were seen massing at four locations around Sanaa, witnesses said, as well as near the house of Sheikh Sadeq al-Ahmar, the leader of the powerful al-Hashid tribe whose forces oppose the government.

A leading opposition group -- the Islah party -- issued a statement Saturday warning the government against any attack against the Al-Ahmar residence.

Tribesmen also gathered near the offices and the businesses of leading opposition officials, they said.

The standoff comes on the heels of five large explosions heard outside the al-Hashid tribal chief's home Friday evening.

On the government side, security forces on Saturday could be seen positioned outside government buildings, Sanaa International Airport, houses of ruling party officials and along main streets of the capital, witnesses said.

Nearly every main street in Sanaa has a checkpoint manned by security forces, they added.

Snipers were also perched on roof tops, particularly near the Presidential Palace, Republican Palace and the Central Security Forces headquarters located inside the capital.

The moves come one day after Yemen air force combat jets bombed tribal forces opposed to the embattled Yemeni president, according to a senior defense official.

At least seven air force bombers were deployed east of Sanaa to the district of Nehm, where two military compounds had been overtaken earlier by tribal fighters, said the official, who was not identified because he is not authorized to speak to the media.

Ahmed Soufi, a senior advisor to Saleh, said 18 people were killed in the fighting.

Witnesses in Nehm said the air-strikes were carried out in several areas of the province northeast of Sanaa, including Al-Fartha Thoma and Beni Shokan.

Clashes in Nehm -- a district with approximately 35 tribes, though not affiliated with al-Hashid -- have been going on for the past month, but erupted this week after tribesmen were barred from entering Sanaa.

The recent fighting has raised fears of a full-blown civil war in Yemen, an impoverished, arid and mountainous nation that has been a key U.S. ally in the battle against the al Qaeda terrorist network.