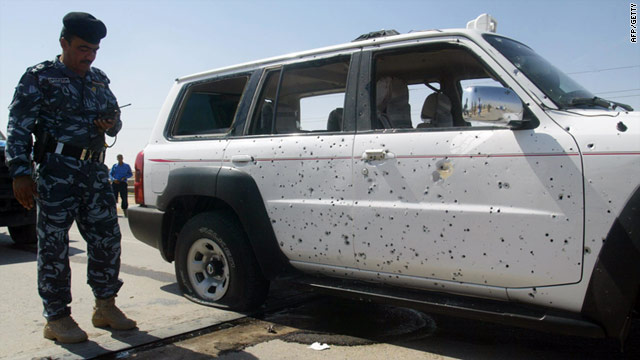 An Iraqi officer inspects the bullet-racked car of the police chief of the town of Dibia, near Kirkuk, on Wednesday.
STORY HIGHLIGHTS
RELATED TOPICS

Baghdad (CNN) -- Four people were killed and two were wounded when a so-called sticky bomb attached to a vehicle exploded Wednesday evening in the Ashhabi neighborhood of eastern Falluja, local police told CNN.

The fatalities -- three Interior Ministry officials and a child -- included the director of the Falluja police intelligence department, the deputy police chief of the Garma police station, the police commissioner and a 7-year-old boy, police said.

The wounded included a 5-year-old boy and a police official, police said.

The children -- brothers -- were playing when the vehicle drove by carrying the four police officials, who had attended a funeral in eastern Falluja and were returning home when it detonated, police said.

Iraqi security forces in Falluja were investigating the incident.

The report of the blast came after bombings in three Iraqi cities over the previous day killed five people and wounded several others, police told CNN.

In one, a colonel was driving from his home in Kirkuk to the town of Dibia, where he served as police commander. Dibia is about 12 miles north of Kirkuk, which is in the country's north.

There has been longstanding sectarian tension among Kurdish, Arab and Turkmen people in Kirkuk. The colonel was Kurdish, but there was no immediate information on whether the bombing was tied to ethnic hostilities.

Over a two-hour period in and around the capital, Baghdad, on Wednesday, three attacks wounded several people, police said. Attackers shot and critically wounded a police colonel while he was driving near Shaab stadium in the east. Five people were wounded in a roadside bombing north of the city in Taji. And a police commissioner was wounded when a sticky bomb attached to his car exploded.

On Tuesday night, three people were killed in Baghdad when a car bomb exploded on a commercial street in the southwestern Saydiya neighborhood. City police said 15 others were wounded.

In Ramadi, more than 60 miles west of Baghdad, a roadside bomb exploded near an Iraqi police patrol, and one police officer died. Ramadi is in the predominantly Sunni Arab Anbar province, an area engulfed by violence during the height of the Iraq war.

This came after a bloody Sunday, when 17 bombs exploded across Baghdad, killing at least 19 people and wounding more than 80, Iraqi authorities said.

The attacks were the latest in a spate in recent weeks that have raised concerns about Iraq's ability to protect itself.

Prime Minister Nuri al-Maliki said he plans to meet this month with Iraqi political leaders to discuss whether to ask that U.S. troops remain in Iraq beyond the January 1, 2012, withdrawal deadline.

Al-Maliki has said al Qaeda and other terrorists are behind the killings, but he also has blamed political movements and security guards, and he has promised to pursue the attackers.