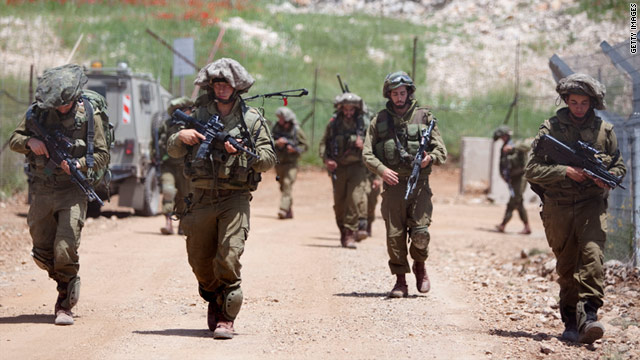 Israeli soldiers patrol along the border fence between the Golan Heights and Syria on May 20.
STORY HIGHLIGHTS

(CNN) -- On the website of Israel's Ministry of Foreign Affairs there is a map -- with a message. The map itself is a basic display of how regional borders looked before the Six Day War in 1967. The message is in the distances drawn from those borders to major Israeli cities.

For example, it's noted that the distance from what was in 1967 the armistice line with Jordan to the Israeli city of Netanya on the Mediterranean was 9 miles; to Beersheeba, 10 miles; and to Tel Aviv, 11 miles. The city of Ashkelon was 7 miles from the edge of the Gaza Strip, then under Egyptian rule.

The point is a simple one: Israel was virtually impossible to defend; any aggressor would try to cut it in half. Read this story in Arabic

That's just what the Arab armies tried to achieve in 1967. On the eve of the war, the Egyptian newspaper al Akhbar noted: "Under the terms of the military agreement signed with Jordan, Jordanian artillery, coordinated with the forces of Egypt and Syria, is in a position to cut Israel in two at Qalqilya, where Israeli territory between the Jordan armistice line and the Mediterranean Sea is only 12 kilometres (7 miles) wide."

His choice of the word "boundaries" may not have been accidental, because in 1967 Israel had no agreed borders with its Arab neighbors. They were instead armistice lines agreed to in 1949 after the division of Palestine. (Internationally-recognized borders with Jordan and Egypt have since been agreed upon.) The Six Day War rendered those armistice lines redundant.

At the end of May 1967, Egypt, Syria and Jordan were massing troops and armor within striking distance of Israel. Egypt had closed the Straits of Tiran to Israeli shipping. On June 5, Israel launched a pre-emptive attack that destroyed much of the Egyptian air force. In the days that followed, Israeli forces captured all of Jerusalem and the West Bank from Jordan, the Golan Heights from Syria and the Sinai peninsula and Gaza from Egypt. Suddenly, Israel had some "strategic depth."

For a time, that altered Israel's military doctrine -- meaning that a pre-emptive first strike was no longer its only option. The October 1973 war showed that Israel was capable of absorbing a first strike and retaliating.

But Ariel Sharon, when he became defense minister in 1981, argued that the modernization of Arab armies and their possession of surface-to-surface missiles had cancelled out the benefits of "strategic depth." He argued that Israel could not absorb a first strike and should be ready to launch preventive and pre-emptive strikes against potential threats. The same argument is made by many Israeli strategists today, in relation to a potential nuclear threat from Iran.

Successive Israeli leaders have rejected a return to the pre-1967 boundaries, starting with Golda Meir in 1969, who said it would be irresponsible for any Israeli government to support such a plan.

Former Foreign Minister Yigal Allon wrote in 1976 that Israel needed defensible borders "which could enable the small standing army units of Israel's defensive force to hold back the invading Arab armies until most of the country's reserve citizen army could be mobilized." When he was prime minister, Menachem Begin said it would be national suicide for Israel to retreat to its pre-1967 borders. And in 2004, President George W. Bush promised then-Israeli Prime Minister Sharon a "steadfast (U.S.) commitment to Israel's security, including secure, defensible borders." Even so, the international community has never recognized Israel's claims to any territory beyond the pre-1967 armistice lines.

Intermittently, there has been greater readiness to negotiate territorial compromise -- most notably at the Camp David summit in 2000, when President Bill Clinton brought together PLO leader Yasser Arafat and then-Israeli Prime Minister Ehud Barak. Barak floated a proposal that would give the Palestinians control of about 90% of the West Bank, while Israel would annex the rest. But there were plenty of complicating factors. According to one account of that summit, Abu Ala'a, a leading Palestinian negotiator, refused to negotiate on a map, arguing that Israel first had to concede that any territorial agreement must be based on the line of June 4, 1967 -- prompting Clinton to exclaim: "Don't simply say to the Israelis that their map is no good. Give me something better!" The summit ended in recriminations.

Ehud Olmert, shortly before he left office in 2008, said Israel would eventually have to give the Palestinians a "similar percentage" of territory in return for the biggest Jewish settlement blocs in the West Bank that Israel would want keep in any "final status" deal. "We face the need to decide but are not willing to tell ourselves: 'Yes, this is what we have to do,'" he said. The man who is now Israel's foreign minister, Avigdor Lieberman, then described Olmert's ideas as insanity.

So what, if any, "mutually agreed swaps" -- the phrase used by Obama -- could give Israel the security and the Palestinians the land that would satisfy both?

"The Palestinian people must have the right to govern themselves, and reach their potential, in a sovereign and contiguous state," Obama said last week. But in the 44 years since the Six Day War, the map of the West Bank has become cluttered with substantial Jewish settlements -- now home to nearly half a million people. A security barrier meanders deep into the occupied territory, protecting the settlements but dividing Palestinian land into a series of enclaves.

In addition, Netanyahu has also said he would insist on keeping Israeli forces in the valley that divides the West Bank from Jordan, even after the establishment of a Palestinian state, as a safeguard against rocket attacks.

"If rockets and missiles break out here, they will reach Tel Aviv, Haifa and all over the state," Netanyahu said as he toured the area in March.

Other Israeli leaders -- including Yitzhak Rabin -- have taken a similar position.

Every year, "facts on the ground" -- and advances in military technology -- complicate the argument over territory, now as visceral as it was in 1967 and 1948. And that's before anyone has uttered the word "Jerusalem."